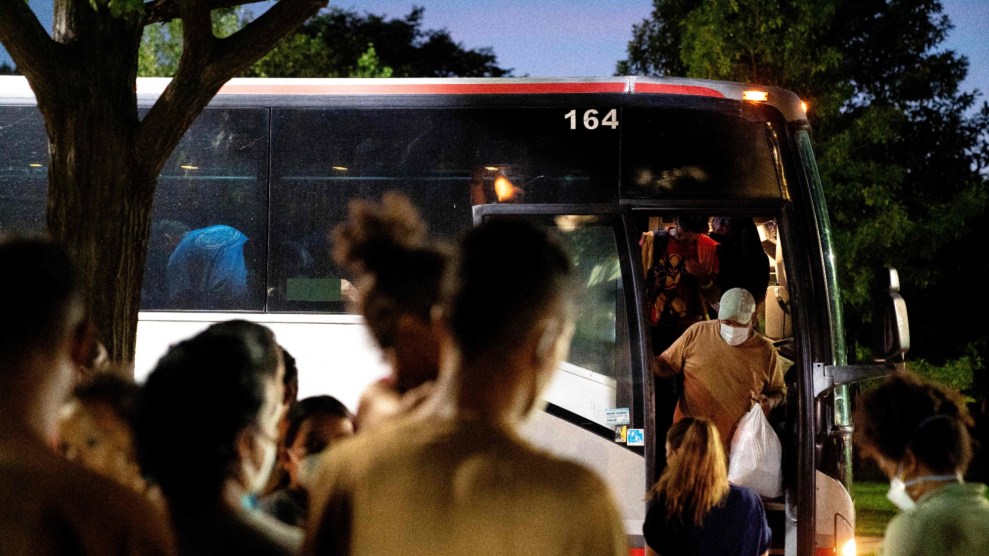 Migrants get off bus from Texas within view of the US Capitol.Stefani Reynolds/AFP

On Thursday, Washington, DC, Mayor Muriel Bowser declared a public emergency in response to the buses of migrants arriving from Texas and Arizona to the Nation’s Capital. The declaration allows for the allocation of $10 million in city funds for a newly created Office of Migrant Services to provide assistance to migrants and nonprofit organizations.

“With this plan, we are staying true to our DC values and building a system that will support a compassionate, consistent, and well-coordinated response,” Mayor Bowser said in a statement. “This is a new challenge for DC, but I feel confident that if we lead with our values, and if we put the right systems in place—which we are doing with the Office of Migrant Services, then we will lead a response that makes our community proud.”

Since April, Texas has shipped more than 7,600 migrants to Washington as part of Texas Gov. Greg Abbott’s political stunt to call attention to the federal government’s immigration policies, which Republicans inaccurately refer to as “open borders.” Another 1,900 people have been sent to New York City, and as of last month, buses have also started heading to Chicago. As I reported in August, the bulk of the work of welcoming the migrants in DC has fallen on mutual aid organizations made up of individual volunteers and grassroots groups with limited resources.

The buses to DC have been arriving almost every day of the week, sometimes multiple times a day and often early in the morning and late at night. According to volunteer groups, only between 10 to 15 percent of migrants actually choose to stay in the DMV area. For those who are lucky, the “free ride” might get them closer to their desired destination, perhaps where family members await—whether in New York, New Jersey, Florida, or Michigan.

Some larger organizations like the international humanitarian nonprofit SAMU First Response, which received a $1 million grant from the Federal Emergency Management Agency (FEMA), have been designated to provide immediate assistance at Union Station. But community groups and volunteers have had to step in to fill the gaps. By July, at the peak of arrivals, two to five buses arrived on a daily basis, and volunteers worked around the clock to send dozens of people to their next stops, says Ashley Tjhung, an organizer with the Migrant Solidarity Mutual Aid Network. (In a few months, the coalition’s expenses have soared to $300,000, to cover food, housing, transportation, and medical assistance.)

According to the mayor’s statement, the new Office of Migrant Services will “provide support with reception, respite, meals, temporary accommodations, urgent medical needs, transportation to final destinations, connection to resettlement services, translation services, and other needs as they are determined.” The District will also request reimbursement from the federal government for the initial $10 million in funds, the statement said.

For months, the mayor has been criticized for her inaction and lack of leadership in the face of what advocates have described as a “humanitarian crisis” fabricated by Republican governors from border states. Over the summer, Mayor Bowser twice asked the Pentagon to deploy the National Guard to the capital to help respond, but both requests were denied. The Defense Department argued that using the National Guard would be inappropriate and expressed concern over having uniformed military personnel dealing directly with migrants without adequate training.

“The mayor’s response is the result of months of organizing and activism by the DC community,” Bianca Vazquez from Beloved Community Incubator, part of the Migrant Solidarity Mutual Aid Network—a coalition of more than 20 DMV area groups—said in a statement. “While we are happy to see Bowser take an interest in supporting migrants being bused to DC, she is five months too late. By abdicating their responsibility for so long, the DC government helped create this humanitarian crisis.”