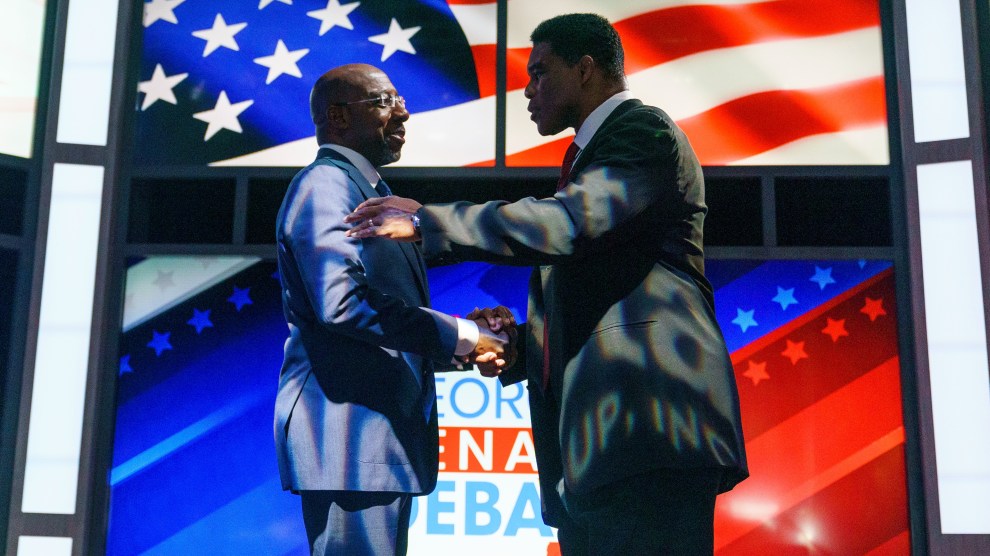 Georgia Senate candidates incumbent Raphael Warnock and challenger Herschel Walker convene in Savannah, Georgia on Oct. 14 for their only debate ahead of the November 2022 election.Photo by Greg Nash/The Hill/Nexstar

Warnock’s assignment was to prove he should keep the job. Walker’s mandate was proving he was fit for it. Friday was the only chance they would get to make their respective cases on the same stage, their first and only face-to-face debate before the election. And with the polls showing a less than 4-point margin in a state where Warnock won his last election by just 2 percentage points, the stakes of the candidates’ answers to questions about these issues couldn’t have been higher.

Walker has been characterized as sounding incoherent at times. Just this week at a rally, he shared a strange story about a bull who abandoned three pregnant cows to visit cows on the other side of the fence. Apparently, Walker was trying to explain that the grass is not always greener on the other side, because the cows across the fence ended up being male bulls. But the metaphor unintentionally evoked the recent bombshell allegations against Walker—that the staunch anti-abortion advocate has been credibly accused of pressuring a woman to get an abortion and paying for it. He’s also been accused of being an absentee father, not unlike the bull who leapt the fence.

Walker’s showing on Friday included a few head-scratchers, but was overall less bizarre than even his supporters were anticipating. “Herschel did a good job of keeping expectations low,” Walker surrogate Ralph Reed told reporters after the debate. “People said he can’t string three sentences together, [and that] he doesn’t know the issues. But that’s not what you saw on the stage.”

Based on crowd reaction, Warnock also had a strong showing, replete with several jabs.

Warnock was questioned about his ex-wife’s request for a child support increase because she felt Warnock’s Senate duties have left her on the hook for high child care expenses. Warnock used the opportunity to subtly dig at accusations that Walker has not been present in his children’s lives. “My children know that I’m with them and for them, and then I support them in every single way,” he said.

Here are five other takeaways from the show-down.

Walker, who has denied allegations that he paid for anyone’s abortion, did not answer whether he would support a full ban on abortion at the national level. He said he supports the Georgia heartbeat bill, which effectively bans abortion at six weeks—before many women know they are pregnant.

Warnock provided his usual answer: “The patient’s room is too narrow and small and cramped a space for a woman, her doctor, and the United States government.” He added that as a reverend, he has a “profound reverence for life” and that as such, he supports efforts to decrease America’s high rate of maternal mortality, especially among Black women, relative to other developed countries.

Warnock said that while people are “feeling pain at the grocery store, and pharmacy counters” many companies “are seeing record profits,” specifically in the oil and pharmaceutical industries. He pointed to the recently passed Inflation Reduction Act and the provisions in it that cap certain drug prices for seniors and insulin prices for Medicare beneficiaries.

“I think he should tell the people in Georgia why he thinks they should have expensive insulin,” Warnock said of Walker, who does not support the legislation.

In a reference to rising food prices, Walker said that “unless you are eating right” insulin “does no good.” (While a healthy diet is an important part of diabetes management, type-1 diabetes is not caused by unhealthy eating.)

On health and health care

Warnock noted the 600,000 people in Georgia who are uninsured because the state’s Republican leadership opted not to accept federal funding to expand Medicaid eligibility to cover more low-income individuals. “Healthcare is a human right,” he said, “and I will continue to fight until the working class people have health care.”

However, it should be noted that as a senator, Warnock is eligible for a government healthcare plan.

In his comments about health care, Walker, who wrote a 2008 book about his struggle with Dissociative Identity Disorder—formerly called Multiple Personality Disorder—said he is no longer receiving treatment for the diagnosis, but that people who are struggling with mental illness can always ask for and receive help. (Walker did not say how uninsured people should afford such mental health help…therapy is expensive y’all.)

On crime and police

Warnock said he believes the bipartisan gun violence legislation passed earlier this year will “indeed save lives” but would work to see what more can be done “beyond that bipartisan basis.”

He also mentioned his support for legislation that helps smaller police departments. Walker responded by saying Warnock “calls them names,” and blaming him for low police morale and poor recruitment.

At this point Walker pulled out a police badge as a prop, and was scolded by a moderator for violating debate rules that forbid the use of props.

Both candidates said they would support the results of their 2022 election, regardless of the outcome.

Walker said he would support Donald Trump if the former president were to run again in 2024. Trump is “my friend and I won’t leave my ally.”

Warnock, however, refused to answer whether he would support President Joe Biden if he were to run for re-election in 2024: “I have not spent a minute thinking about what politician should run for what in 2024.”

“The people of Georgia are going to decide who’s going to be the senator in three days” when early voting starts, Warnock said, “and I hope they’ll show up and vote.”