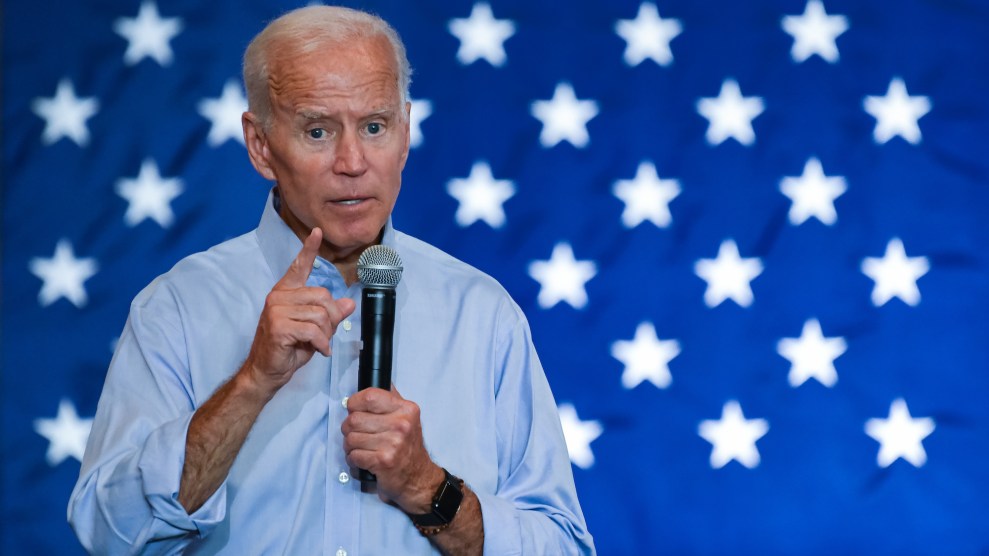 After an evening of police violence against protesters outside the White House, Joe Biden had a message for President Donald Trump: His actions and inflammatory rhetoric are worsening the country’s deep racial divides.

“A president of the United States must be part of the solution, not the problem,” said the former vice president, speaking in Philadelphia Tuesday morning. “But our president today is part of the problem, and he accelerates it.”

Biden portrayed the White House’s decision to forcefully break up a demonstration with tear gas and rubber bullets—apparently so the president could take a picture outside of nearby damaged church—as an act of selfishness from a man “more interested in serving the passions of his base than the needs of the people in his care.”

“When peaceful protesters are dispersed by the order of the president from the doorstep of the people’s house, the White House—using tear gas and flash grenades—in order to stage a photo op at a noble church, we can be forgiven for believing that the president is more interested in power than in principle,” Biden said.

Monday’s events offered just the latest opportunity for the presumptive Democratic nominee to contrast himself with the president in this week of civil unrest. As Trump stays sheltered in the White House, save for his 600-foot walk to the church, Biden has ventured out—to the site of a protest in his hometown of Wilmington, Del.; to a local church to meet with community leaders; and to Philadelphia, the first time he’s crossed state lines to campaign since the coronavirus pandemic took hold. While Trump has largely used Twitter to register his thoughts, Biden has repeatedly addressed the nation about George Floyd’s death at the hands of Minneapolis police, the ensuing nationwide protests, and systemic racism in American life. And while Trump has urged violence against protesters, Biden promised that, as president, he “will seek to heal the racial wounds that have long plagued this country.”

As he spoke Tuesday, Biden argued that Trump’s behavior isn’t merely unbecoming of the office he holds, but is also an accelerating factor in the racial inequalities at the root of demonstrators’ outrage. “His narcissism has become more important than the needs of the nation he leads,” Biden said, pointing to Trump’s threat on Twitter last week that “when the looting starts, the shooting starts.”

“Those weren’t the words of a president,” Biden said, noting the phrase’s ugly history. “Those are the words of a racist Miami police chief in the 1960s.”

Biden vowed that he would not let Trump’s divisiveness “distract us from the very real and legitimate grievances at the heart of these protests.” He reiterated his promises to create a national police oversight commission during his first 100 days and to address economic and health care disparities facing Black Americans. He also promised that if Senate continues to confirm “Trump’s unqualified judicial nominees who will run roughshod over our Constitution,” he will seek legislation to strengthen civil rights protections.

Throughout his more than yearlong campaign for the presidency, Biden has promised to fight for “the soul of the nation,” which he often referenced as a promise to restore a pre-Trump era of normalcy. That message put him at the top of the Democratic ticket, but it has also been understandably criticized by some Black Americans, for whom even the time before Trump was marked by deep systemic racism.

Biden’s remarks Tuesday offered the starkest evidence yet that he is listening to that feedback. When he talked about “the soul of the nation,” he looked forward, saying that “who we want to be is at stake.” America, he said, is “a union that constantly requires reform and rededication—and yes, the protests from voices of those mistreated, ignored, left out and left behind.”