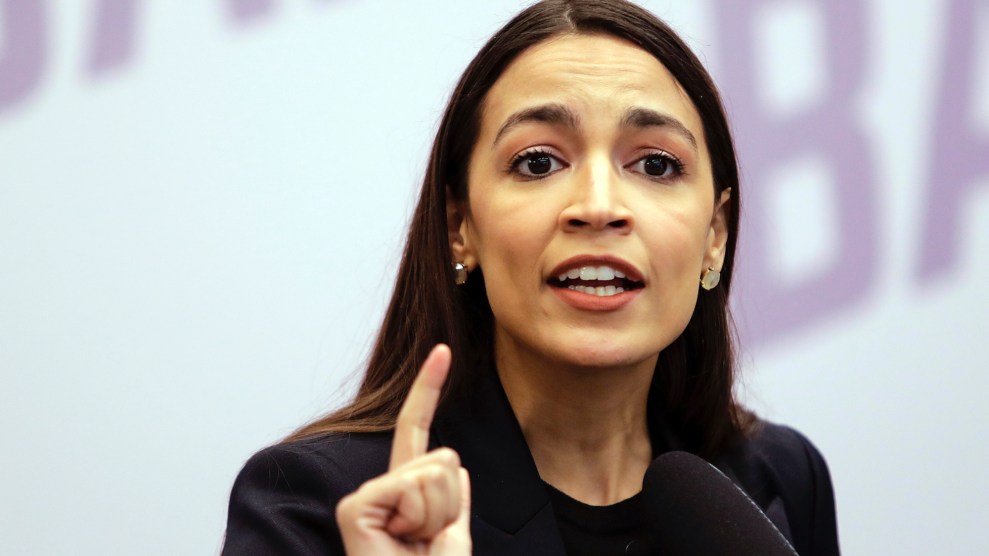 Rep. Joe Kennedy III (D-Mass.) has premised his primary challenge to Sen. Ed Markey (D-Mass.) on an argument about generational change. The 39-year-old Kennedy, the grandson of RFK and grandnephew of JFK, said he was in the “fight of my generation” in his race against the 74-year-old Markey, who has served in Congress since the bicentennial.

But on Thursday, the Boomer incumbent got an assist from the quintessential millennial lawmaker, Rep. Alexandria Ocasio-Cortez (D-N.Y.), who appeared in a new advertisement on Markey’s behalf. Her argument: The generational change progressives are looking for is as much about one’s ideas as their age.

The ad features Ocasio-Cortez talking straight to the camera as she touts Markey’s record as an original cosponsor of Medicare for All and his work on the Green New Deal, which Markey and AOC co-wrote. “When it comes to progressive leadership, it’s not your age that counts, its the age of your ideas,” Ocasio-Cortez says.

Ocasio-Cortez’s script echoes the words Markey himself used to defend his incumbency to the Boston Globe editorial board, which endorsed him on Wednesday. The argument takes direct aim at the premise of Kennedy’s candidacy, which the Globe described as a “generational showdown” between two candidates “separated more by age than ideology.”

But progressives like Ocasio-Cortez flocked to Markey’s defense on the eve of Kennedy’s announcement to counter that narrative. Indeed, both Kennedy and Markey have signed their names to liberal legislation like the Green New Deal and Medicare for All. More than $20 million has been spent in the US Senate Democratic primary in Massachusetts, a head-scratching amount for a contest between two lawmakers with two solidly liberal records running to represent a deep blue state. Markey’s supporters on the left say that it doesn’t just matter what lawmakers put their names on, but how they go about doing it. “Joe Kennedy got on board with the Green New Deal, but Ed Markey was there on day one,” Stephen O’Hanlon, a spokesperson for the Sunrise Movement, told me last fall.

And while Ocasio-Cortez herself won office based in part on an argument of generational change, Waleed Shahid—a spokesperson for Justice Democrats, which has backed several progressive primary challengers—told me that is just one piece of what’s needed to advance a progressive agenda. There’s a role for incumbents like Markey, who has served in Congress for more than four decades:

There are the Overton window-movers like the Squad, who represent the purest form of the left’s political and policy vision. But there’s also people like Markey, “Democrats who have powerful roles in the party but see the winds changing” and choose to lead on progressive issues. Markey, Shahid explains, can “shift the center of gravity in Washington,” channeling the energy of the activist left to ensure their demands are represented at the negotiating table.

Kennedy’s campaign manager slammed the Globe‘s endorsement, accusing the paper of catering to its “disproportionately white, well-off, well-educated readers” who thrive on the “status quo.” Though polls showed Kennedy with a double-digit lead when he entered the race, both campaigns have said the race has tightened considerably in recent months, according to Politico.