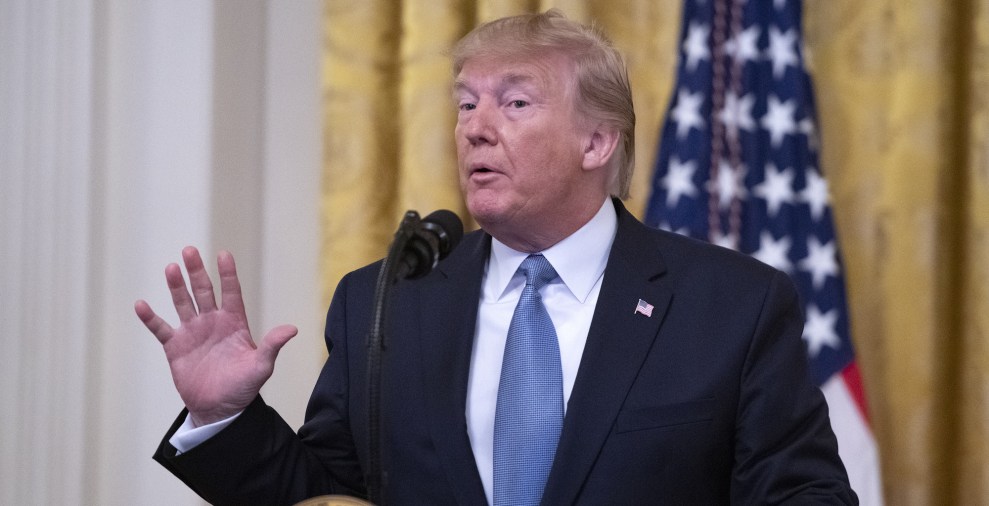 There were so many lies strung together in President Trump’s environmental speech from the White House on Monday, it’s a challenge to fact-check.

“I’m glad you finally let people know what we’re doing,” Trump said, taking the podium from his Environmental Protection Agency chief Andrew Wheeler, who was one of the string of speakers appearing Monday in an event billed as touting America’s environmental leadership. “We’re working hard, maybe harder than all previous administrations, maybe almost all of them.”

The audience laughed in response, as if in on the joke. (Since I was denied press credentials, I did not attend the East Room event and watched it on C-SPAN.)

Flanked by Ivanka Trump, half his Cabinet, and some select Republican members of Congress, Trump gave a rare and strange speech that meandered into the economy, plastics, particulate matter, the Paris climate agreement, and the Green New Deal. He claimed outright success on the environment despite the fact that for most of his administration, Trump and his Cabinet have participated in high-profile events at the EPA to celebrate rolling back major environmental and climate regulations—often with coal miners as a backdrop. The administration has already reversed more than 80 regulations protecting the air, water, and climate, while civil penalties for polluters were down 85 percent last year compared to the decade average.

To then claim he’s leading the world in environmental leadership is a lot like gaslighting, environmentalists pointed out before the speech. For instance, when Wheeler, who has been instrumental in rolling back many rules targeting ozone, methane, fuel efficiency, and water pollution announced at the same event, “Pollution is on the decline.”

Trump repeated claims that the US has cleaner air and water than the rest of the world, all of which have been routinely debunked.

“From day one, my administration has made it a top priority to make sure America has among the very cleanest air and cleanest water on the planet,” Trump said. “We want the cleanest air. We want crystal clean water. And that’s what we’re doing.”

This statement is wrong not just because Trump has rolled back so many environmental protections in half a term, but because the US does not actually have the cleanest air and water in the world. Pick your pollution, and the US has often trailed behind other wealthy countries—10th on overall air quality and 29th on water and sanitation, according to Yale’s Environmental Performance Index. Switzerland is number one. “The United States places 27th in the 2018 EPI, with strong scores on some issues, such as Water & Sanitation (90.92) and Air Quality (97.52), but weak performance on others, including deforestation (8.84) and GHG emissions (45.81),” the Yale Environmental Performance Index notes. “This ranking puts the United States near the back of the industrialized nations,” behind the UK, Germany, Italy, Japan, Australia, and Canada.

When Trump uses arbitrary comparisons and percentages, there is a lot of obfuscation that can be done just by changing the timeline and the kind of pollution you’re looking at. When it comes to air and water pollution, most metrics look much better today than when the Clean Air Act was in its infancy in the 1970s, which is Trump’s point of reference. But when you look at environmental gains in the past few years, especially on Trump’s watch, the progress has either stalled or been reversed.

By the EPA’s own admission, the number of unhealthy air quality days in 35 major cities has gone up since 2016, from 702 days to 799 days. But the EPA characterizes this as “long-term improvement,” which it is—compared to 2000, and about 141 million Americans are still exposed to harmful pollution.

Consider carbon pollution levels, which are increasing again. An analysis by the Rhodium Group found carbon emissions spiked 3.4 percent in 2018 after three years of decline, the second-biggest increase in two decades. The growth in transportation and natural gas plants share the blame.

“There is no evidence that the air and water have gotten cleaner during the Trump administration,” said Judith Enck, visiting professor at Bennington College and former EPA regional administrator. “No amount of green washing that was on display in his speech will wipe away the severe and long lasting damage that he and his appointees have inflicted on the people and on the planet.”