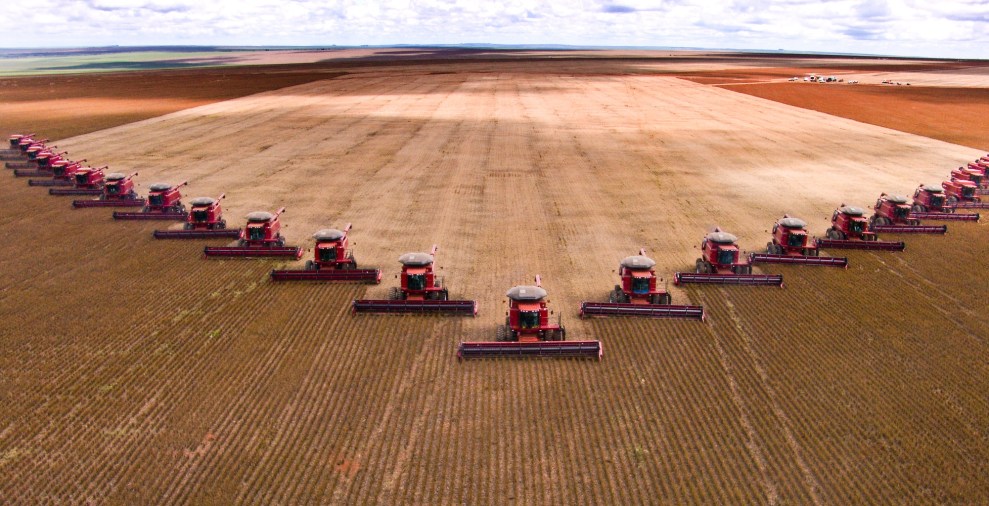 The soybean harvest in Brazil, one of the epicenters of industrial agriculture. alffoto/iStock/Getty

When politicians, scientists, and activists from 196 nations convene in Glasgow for the United Nations’ 26th annual climate summit, they’ll nosh on “‘plant-forward’ seasonal food sourced overwhelmingly from the U.K., with a focus on ingredients produced using environmentally friendly practices,” Bloomberg reports. What won’t be on the table at COP26, as the confab is known: a plan for cutting greenhouse gas emissions from food production, or for preparing the globe’s farms for the accelerating shocks of a fast-warming climate.

Hailed by its organizers as the “world’s best last chance to get runaway climate change under control,” COP26 is the place where the world’s nations come together to deliver their plans to cut greenhouse gas emissions. It will devote not a single day of its 10-day schedule to food and agriculture, a sector that accounts nearly a quarter of emissions worldwide.

In an important sense, before the conference even started, it had already  condemned the world to a highly uncertain food future. Days before the confab’s Oct. 31 start, the UN Environment Programme released its assessment of all the new national climate pledges nations are expected to make at COP26. The result: they “put the world on track for a global temperature rise of 2.7°C by the end of the century,” blowing past the goal of limiting warming to 1.5°C set by the Paris Agreement in 2015. (So far, the mean global temperature has risen about 1.1°C since the Industrial Revolution.) That’s bad news for your kitchen table.

In an authoritative 2017 report published in the Proceedings of the National Academy of Sciences, a global team of researchers crunched data on the effect of rising temperature on yields of wheat, rice, corn, and soybean, which together provide about two-thirds of human caloric intake worldwide. They found that “each degree-Celsius increase in global mean temperature would, on average, reduce global yields of wheat by 6.0 percent, rice by 3.2 percent, maize by 7.4 percent, and soybean by 3.1 percent.”

Warmer temperatures are already decimating the snowpacks of Western mountain ranges that irrigate the great bulk of US fruit, vegetable, and nut production.

Here in the United States, warmer temperatures are already decimating the snowpacks of Western mountain ranges that irrigate the great bulk of US fruit, vegetable, and nut production—and the additional heat embedded in the COP26 commitments will sap them even further. In the midwestern corn belt, increasingly fierce winter storms are causing an erosion crisis that has already stripped the topsoil layer off of a third of the region’s farmland. Combine that effect with hotter, drier summers, and you have the specter of sharply lower crop yields.

COP26 doesn’t offer much hope for alleviating these unappetizing trends, says Raj Patel, an activist, food systems researcher at the University of Texas’ LBJ School of Public Affairs, and co-author of the book Inflamed: Deep Medicine and the Anatomy of Injustice. “In the words of several drunken Scots, ‘it’s all mouth, no trousers,'” he says. Fundamentally, the UN’s climate change process involves urging nation-states to commit to emissions cuts, and “nation-states are easy to lobby for the fossil fuel industry—and so [the industry has] always been very successful at tamping down ambitions, even when the mass of humanity agrees that we would like a planet to live on, please.”

He cites the example of the Build Back Better Bill now teetering in Congress, which President Joe Biden had hoped would be passed in time to brandish at Glasgow. Originally, it contained a provision called the Clean Energy Performance Program, which would have deployed carrots and sticks to push the US electricity grid to draw 85 percent of its energy from clean sources by 2030, resulting in a sharp drop in greenhouse gas emissions. But Sen. Joe Manchin (D.-W.V), tightly allied with the coal and natural gas industries, has managed to eject that program from the bill. Biden himself pledged to end new oil and gas drilling on federal lands during his presidential campaign—yet has issued new permits at a pace unseen since the reign of George W. Bush. Mother Jones’ Piper McDaniel recently laid out actions that Biden could take to ramp down US fossil fuel production without the help of Congress—none of which he seems likely to take anytime soon, if ever. “The imperatives of the oil industry will seem always to hold,” Patel says.

Big agrichemical and meat firms, too, have their say. Tom Vilsack, the former dairy executive whom Biden tapped to run the US Department of Agriculture, has joined with a bunch of industry groups and conglomerates to counter a push by the  European Commission to slash farm pesticide use, meat consumption, and thus food-related greenhouse gas emissions on the continent, an effort I wrote about last month. Vilsack’s Coalition for Productivity Growth is a fledgling group of nations pledging not to follow the European path on food policy.

The coalition’s private sector “supporters” include Bayer, Syngenta, and Corteva, the three dominant players in the global pesticide and seed markets; the American Meat Institute, the trade group for the meatpacking industry; and the Dairy Export Council, the industry group that Vilsack led before taking his current post at USDA. The US meat and dairy industries are large and growing emitters of methane, a greenhouse gas that traps heat at 80 times the rate of carbon. Of the nine mostly small nations Vilsack has managed to enlist in his coalition coalition of the tilling (hat tip, Politico), two—Brazil and Australia—are essentially rogue states when it comes to climate. And both have potent, greenhouse gas–intensive agribusiness sectors.

Big events like the annual COP meetings can have the effect of mobilizing energy at the subnational level—within cities and states—that are less constrained by powerful industry lobbies, Patel adds. He points to the Glasgow Food & Climate Declaration, an effort he helped spearhead to get cities and federal states worldwide to commit to “developing sustainable food policies” and “call on national governments to put food and farming at the heart of the global response to the climate emergency.” Seventy cities worldwide have signed on, including five in the United States.

One hopeful note about the COP26 meeting is that it could potentially deliver commitments to relieve debt for nations in the global south—the ones that have emitted the smallest fraction of the greenhouse gases that drive climate change, but are most vulnerable to its ravages. Patel points to Mozambique as an example of why debt relief needs to be at the center of global climate policy. “When a tropical cyclone plows through Mozambique, what do they do? Well, they have to borrow money in order to rebuild the infrastructure,” he says. “That gets them back into yet further debt—so all of a sudden, Mozambique, already one of the most indebted countries on earth, is casting around for ways to repay that debt,” by doing things like drilling for oil or potentially razing carbon-capturing rainforests for palm oil plantations. So climate havoc begets debt, which forces actions that contribute to more climate havoc.

On Oct. 28, days before the launch of COP26, UNCTAD—the UN arm that looks at global trade—issued a report declaring that “debt relief and restructuring for developing countries should be put firmly on the climate agenda.” Whether COP26 will lead to a real commitment to debt relief remains a question. “It’s not enough to cut greenhouse emissions today if debt peonage demands that poorer countries are compelled to mine, drill, chop, and burn to repay their creditors tomorrow,” Patel says. “COP26 needs to commit not just to reducing emissions, but to inverting the structures of debt in the Global South.”