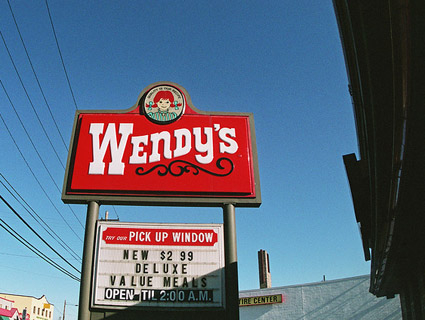 McDonald’s, it turns out, isn’t the only fast-food giant to have cut ties with the American Legislative Exchange Council, the corporate-funded organization that writes up model bills for thousands of state lawmakers nationwide. Wendy’s said on its official Twitter feed on Tuesday night that it, too, had left ALEC. “We decided late 2011 and never renewed this year. It didn’t fit our business needs,” the company tweeted. Wendy’s is currently not a member of ALEC, it stressed.

Bob Bertini, a spokesman for Wendy’s, confirmed the move. “The tweet is correct. Wendy’s is not a member of ALEC. Last year, we made the decision not to renew for 2012,” he wrote in an email to Mother Jones.

Wendy’s departure is arguably more significant than McDonald’s given Wendy’s past support for conservative and staunchly pro-industry causes. For instance, Wendy’s International has funded the Center for Consumer Freedom, a phony grassroots group that fights regulation of the food and beverage industries. And Wendy’s political action committee has given significantly more of its money in recent election cycles to Republican lawmakers than Democrats, according to the Center for Responsive Politics.

The departures come as a coalition of liberal groups presses high-profile ALEC to members to leave group over what the coalition calls the “discriminatory” voter identification legislation peddled by ALEC. The coalition, which includes Common Cause and ColorofChange.org, has also bashed ALEC for supporting Florida’s “Stand Your Ground” law at the center of the Trayvon Martin shooting in central Florida.

On Tuesday, ALEC released a statement in response to what it called a “well-funded, expertly coordinated intimidation campaign” pressuring member companies to cut ties with ALEC. “At a time when job creation, real solutions and improved dialogue among political leaders is needed most, ALEC’s mission has never been more important,” said Ron Scheberle, ALEC’s executive director. “This is why we are redoubling our commitment to these essential priorities.  We are not and will not be defined by ideological special interests who would like to eliminate discourse that leads to economic vitality, jobs and fiscal stability for the states.”

UPDATE: Common Cause, the good-government group that’s part of the coalition pressuring member companies to leave ALEC, says in a statement responding to ALEC that “It’s no surprise that ALEC would call the free exercise of democracy an ‘intimidation campaign.'” Common Cause goes on to say:

The truth is that many Americans find ALEC’s secretive efforts to push public policy for the economic and partisan interests of its corporate sponsors both undemocratic and unsavory. That’s why companies like Coca Cola, Pepsi, Intuit, Kraft, and McDonalds are exercising their free market right to pull out. Good corporate managers know that attaching their brand to radical and divisive legislation is not in the best interest of their shareholders, and Common Cause applauds their leadership.

“Sunlight is the best disinfectant, and we will continue to educate the public about ALEC’s agenda, and highlight the influence of corporate money in our state laws and public policies,” said Bob Edgar, president of Common Cause.