Earlier this week the Wall Street Journal passed along some good news: Within a few years, America will be able to substantially reduce its dependence on Middle East oil.

The shift, a result of technological advances that are unlocking new sources of oil in shale-rock formations, oil sands and deep beneath the ocean floor, carries profound consequences for the U.S. economy and energy security. A good portion of this surprising bounty comes from the widespread use of hydraulic fracturing, or fracking, a technique perfected during the last decade in U.S. fields previously deemed not worth tampering with.

By 2020, nearly half of the crude oil America consumes will be produced at home, while 82% will come from this side of the Atlantic, according to the U.S. Energy Information Administration. The change achieves a long-sought goal of U.S. policy-making: to draw more oil from nearby, stable sources and less from a volatile region half a world away.

The article mainly emphasizes the benefits of new shale oil fields that have been opened up by hydraulic fracturing. But I think this is a misreading. Fracking is important, but it’s not really the key to America’s petroleum future. Here are three things you should know from the recent release of the EIA’s Annual Energy Outlook 2012. 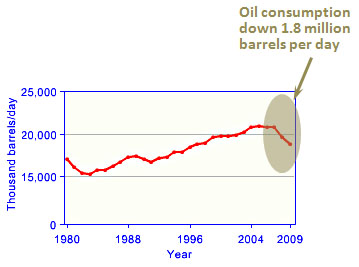 #1: We could stop importing oil from the Middle East today if we wanted to.

So how much oil do we import from the Persian Gulf? Answer: in 2007 we imported 2.1 million barrels per day, about 10% of our total consumption. The fact is that we’ve never heavily relied on Persian Gulf oil, and if we had chosen to, we could have cut Middle East imports to zero based solely on our drop in consumption over the past few years. Far from trying to wean ourselves off Middle East oil, we’ve made a conscious decision to keep buying it. 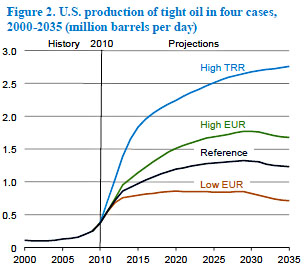 #2: EIA only projects a small amount of new production from shale oil.

The Journal suggests that “tight oil” produced from shale deposits is a key reason that the US will be able to reduce oil imports in the future. But although shale oil is important, the fact is that EIA projects only a modest amount of new production from shale fields.

The chart on the right shows various projections. In the best case, shale oil could amount to nearly 3 million barrels per day, but that’s unlikely. EIA’s “reference case” — i.e., their best estimate — is that shale fields will peak at 1.3 million barrels per day and then start to decline. That’s not nothing, but it’s only about 7 percent of our total consumption.

#3: The main source of lower oil imports comes from better fuel economy and other efficiency measures, not from fracking.

That’s a difference of more than 4 million barrels per day — and it’s by far the biggest contributor to our projected reduction in imports. The chart on the right shows the real explanation for declining imports: It’s because we’re using energy a lot more efficiently, and per capita energy use is therefore forecast to be on a steady downslope. Fracking may be sexy these days, but as always, it’s drab old energy efficiency that has the biggest potential to lead the way toward energy independence. It may be boring, but if we paid even more attention to it, it would reduce energy imports far more than fracking ever will.