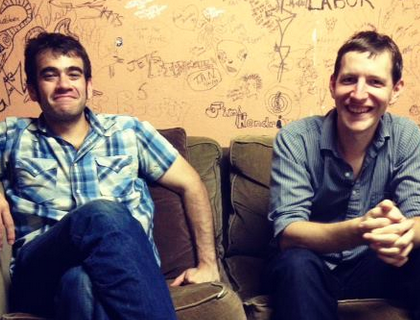 Bluegrass hipsters the Punch Brothers are singing about how rye whiskey “makes your baby cuter” when it starts to pour. The clouds bust open, turning the Austin City Limits grounds into a mudpit. At other stages, people make a run for it—but fans of these charming acoustic rockers don’t move. Instead, they kick up their heels and dance through the thunderstorm.

The band is at home playing in the great outdoors, but thanks to their rapid rise to global fame (Chris Thile, the band’s founder, was awarded a $500,000 MacArthur “genius grant” in October) they are bringing their unique brand of prodiguous folk everywhere from European art houses to swanky New York City dance halls.

I caught up with banjoist Noam Pikelny and guitarist Chris Eldridge in Austin, and bassist Paul Kowert and violinist Gabe Witcher over the phone in Pheonix—Thile, whom MoJo’s Maddie Oatman has spoken with in the past, couldn’t be reached—to discuss spicy fried chicken, why their music is hard to categorize, and why they’ll be going into hiding this summer.

Mother Jones: According to, um, Wikipedia, your style of music is “bluegrass instrumentation and spontaneity in the strictures of modern classical.” What do you think about that?

“We became branded as this kind of country-classical band, but now when I hear that term, it seems so off the mark.”

Noam Pikelny: The band came together as Thile’s brain child and he wrote this piece called the Blind Leaving the Blind, which was really a string quintet written for bluegrass, that had sections for improvisions. There was a score for it, like an other classical piece, and that’s what we came out of the gates playing. In The New York Times, we became branded as this kind of country-classical band, but now when I hear that term, it seems so off the mark. We’ve since evolved into something that much more collaborative—and the material exists much more in standard song form.

Paul Kowert: Our fan base has shifted, we’re playing different venues, like standing-room rock clubs, and for a younger audience than we used to. We’ve had to start playing louder as a result…but we’ve always listened to all kinds of stuff, and there’s nothing really that’s off limits. We love Radiohead and the Strokes and Dr. Dre, R & B stuff, total pop from the early-’90s. There’s just tons.

MJ: Even though you’ve moved away from strictly bluegrass, there’s still a fair amount of improvisation at your shows, right?

Chris Eldridge: We all grew up playing bluegrass, and that’s a tradition in which improvisation plays a really important role, so there are songs where everybody will get a chance to take a solo. We try to have opportunities for the music to go new places. You’re never going to hear the same show.

MJ: Speaking of shows, do you have any preshow rituals?

Eldridge: The one thing we always do no matter what is we are led in a completely a-religious prayer.

“When it’s time to write, anything is fair game; any of the five of us might bring a seed.”

Pikelny: There’s no burning of sage or any ritual sacrifices. We already have our instruments and our in-ear monitors and we’re essentially just wishing each other good luck. It’s also an opportunity make fun of Paul, our bass player—who can take it because he’s really talented.

MJ: So, has band-life changed since Chris Thile was named a genius?

Kowert: We make fun of him always. It’s our duty.

Gabe Witcher: Every little bit of anything helps, and that’s a pretty big thing. But to be honest, it’s kind of hard to tell [whether Thile’s MacArthur has raised the band’s profile], especially when we’re out here traveling. You don’t get a lot of feedback about that kind of stuff, you just do you show and move on to the next town.

MJ: Your last album was an EP (Ahoy!) of material left over from the Who’s Feeling Young Now recording sessions. What’s your recording/songwriting process like?

Eldridge: When it’s time to write, anything is fair game; any of the five of us might bring a seed. It could be a melody, a set of chords, a rhythm, or something some guy on his own has turned into a verse. But whatever it is, it gets put in front of the band’s collective consciousness. It’s a pretty mecurial process and every song comes to life a little differently.

Pikelny: It’s surprising sometimes how the ideas you’re least proud of are often times the things that people are attracted to. There are times where you’ll be warming up in the dressing room next door and someone else will come and say, “Wait what were you playing? That was great!” And you were just fucking around. So we’ll catch each other doing something stream of conscience.

Witcher: Also, when we’re recording, right around 4:30 in the evening we start making cocktails.

Kowert: There was also that time we decided to indulge in some hot chicken and it was really, really hot. All of our noses were dripping and we were all red-faced and loving every second of it.

MJ: What have you got planned for this spring?

Kowert: After the February tour ends, we’re going to drop off the map and get together on a regular basis and write the next record over a longer period of time, longer than we’ve ever taken before. We’re going to use the rest of 2013 to write, and we really don’t know when we’ll be done. But we’ll get new tunes out as soon as we can!