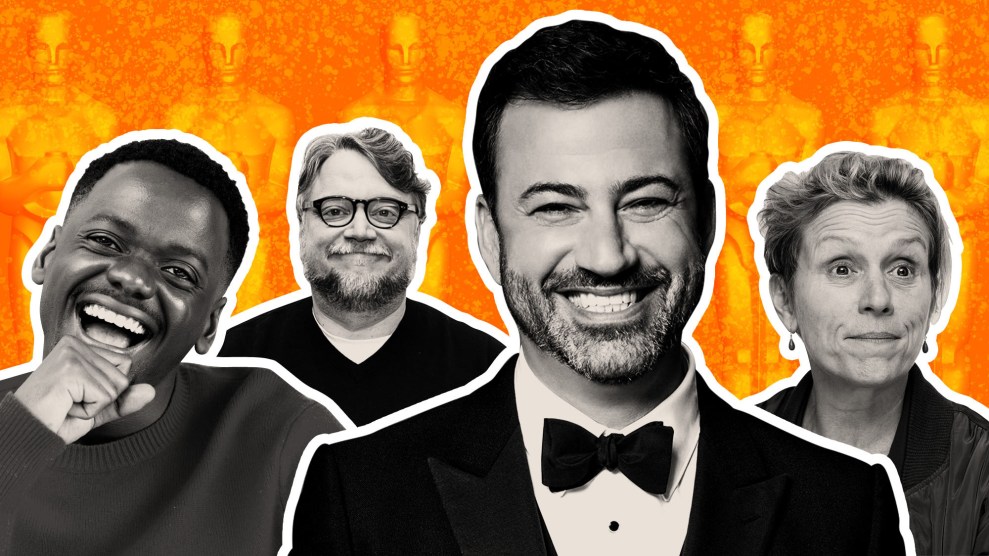 It’s 2018 and everyone is sad but in Los Angeles the world’s most glamorous celebrities and talented auteurs are getting ready for Hollywood’s biggest night as the film industry comes together to celebrate the best movies of the year.

There are Oscar pools for people who need that extra bit of cayenne in their pop culture experience. Some vote with their hearts, others vote with a cold hard calculous that suggests WWII films win. I personally like to wing it. You can read my ballot here and tell me how stupid I am later.

Many zillions of people do not like the Academy Awards because they think it is just an excuse for the most attractive rich people on Earth to get together and pat each other on the back for being so great and so enlightened. But who cares? Every industry has circle jerks, and at least at this one there’s live music!

The Oscars are a sad joke, very much like our President. So many things are wrong!

But the truth is the Oscar nominees gathering at the Dolby Theater tonight are actually not just rich attractive people. They’re rich attractive union members. SAG! DGA! Even the producers have a guild. Why does that matter? Because the real Mother Jones loved unions. It was her thing. Now whether you buy that that is why Mother Jones is live blogging the Oscars tonight or believe that I just came up with that excuse a second ago and didn’t think about it for even a second before typing it out, the fact is, I am live blogging the Oscars tonight.

I’ll be joined by my colleague Jackie Mogensen who recently wrote a fascinating story about Academy Awards gone missing.

I don't know how much longer I can take this bullshit – so terrible! #Oscars

Hello, good day. The Oscars has not started yet but this video from the red carpet is amazing.

8:05pm: Jimmy Kimmel is making some jokes about how last year they screwed up and gave Best Picture to La La Land instead of Moonlight. The jokes aren’t very funny. But that mistake last year was! Hahaha, remember? Oh how we laughed.

8:06pm: “Oscar is the most respected man in Hollywood…no penis. The type of man we need more of in Hollywood.” Hahaha.

8:08pm: Jimmy Kimmel says that people should keep watching the show because there are a lot of political speeches coming. Delicious! But I guess that means the music acts aren’t great.

.@jimmykimmel encourages passionate and substantive speeches at tonight's
#Oscars—and "if you want to encourage others to join the amazing students at Parkland at their march on the 24th, do that." https://t.co/lJd891ISOk pic.twitter.com/bGZcEGRB4U

8:12pm: “We don’t make films like Call Me By Your Name for money, we make them to upset Mike Pence.” Haha.

8:13pm: “The year men screwed up so badly that women started dating fish.” This is a reference to the movie the Shape of Water and also how bad men are.

8:30pm: Sam Rockwell won best supporting actor which is fine and expected. He’s great. I don’t know if this was his best performance but whatever.

Sam Rockwell’s dad left the cutest note on the NYT a few months ago.

Congratulations to one New York Times commenter on his son's win at the Oscars pic.twitter.com/PFcjkVcTPq

This year, anybody with a long speech won't get played off by music. Instead, this will happen…https://t.co/lJd891ISOk #Oscars pic.twitter.com/5ZAB0EDo7M

8:33pm: Then also the movie about little-known historical figure Winston Churchill won a technical award. I didn’t love that movie.

8:35pm: Phantom Thread won for costume design. And, look, I thought that movie was very very boring, but it did have nice costume design! Also a very nice score. Also the acting was fine. Also the movie looked great. But really it was just very long and flat and boring.

8:41pm: Laura Dern is presenting some award and omg you know what was so good? Big Little Lies. It isn’t nominated tonight. It’s not a “film” so the brown shirts at the rule factory won’t let it win an Oscar. But it was great! Laura Dern was in it. You should see it! Do you have HBO Go? You should watch it right! It’s actually better than this boring show so far. But it’s very long. You’ll have to not watch it all tonight or you’ll have to be late for work tomorrow. Oh, snap Icarus won!

Looking forward to being with @marklevinshow on his new Fox News show! Much better than Oscars! https://t.co/OEhVt8aaWj

8:58pm: The 90 years of Oscars montage has the song from Love Actually, a wonderful film that definitely didn’t win an Oscars.

I love Rita Moreno so much, and even more for rewearing the dress she wore when she won for West Side Story in 1962 (!) pic.twitter.com/iUljJTDyv0

"To all the dreamers out there, we stand with you." #Oscars pic.twitter.com/RT0iVzgj6E

9:12pm: So far tonight, the Academy has handed out seven awards. Oscar statuettes cost only a few hundred dollars to make, but over the years, they’ve been sold for tens of thousands of dollars, or in the case of one award, for millions. In 1999, Michael Jackson bought a Gone With the Wind Best Picture Oscar for $1.5 million. (The award supposedly vanished after his death and was reported missing in 2016). —JM

9:15pm: BREAKING: This is the second year in a row when the guy from Mozart in the Jungle showed up at the Oscars and did a performance! He’s great! That show is great!

9:26pm: A Fantastic Woman won best foreign language film. We chatted with the star of that film earlier this year.

9:31pm: Allison Janney wins the Oscar for Best Supporting Actress. Eighty years ago, Alice Brady won the same award for her role in In Old Chicago, and a “mystery man” accepted the award on her behalf (O’Brien was tied up at home with a broken ankle). As legend goes, he—and the award—were never seen again. Well, it turns out that legend was total fake news. —JM

9:33pm: I would just like to point out that I am 100% correct tonight so far picking winners. (I can’t figure out how to link to the NYT actual ballot lol.)

9:45pm: Kobe Bryant, who was once accused of rape and subsequently acknowledged partial guilt in an out of court settlement, won an Academy Award at the #MeToo Oscars.

9:55pm: Blade Runner 2049, a movie I really did not like, won best visual effects AND SPOILED MY PERFECT BALLOT. Trump is right. The Oscars are bad.

I don't know how much longer I can take this bullshit – so terrible! #Oscars

10:11pm: I’m intensely bored. Why is this whole show feeling so flat?

Daniela Vega is the first openly transgender person to ever present at the #Oscars. https://t.co/DNWArXgVva pic.twitter.com/x4TEBKLYTt

10:27pm: This is going to go on forever. We still haven’t even gotten to the medium awards yet! The top shelf awards are NEVER GOING TO HAPPEN.

Worth returning to the very brave @AnnabellSciorra’s story tonight as she presents at the Oscars. She went through hell to tell it, and in doing so she helped an industry and survivors everywhere. Thank you Annabella: https://t.co/hbkCsZRqMm

moved by Annabella Sciorra particularly—and thinking about what a competent host could do with this subject matter, not necessarily comedically. Why run to a random screening room to yell at civilians when the issues are right here…

This montage is great in theory but 7% of movies last year were directed by women #Oscars90 https://t.co/XD2mOIGgYh

10:35pm: Call Me By Your Name won for best adapted screenplay. James Ivory is 89 and just won an Academy Award!

10:38pm: Get Out wins Best Original Screenplay! Nominated for four awards tonight, Get Out was the most profitable Best Picture nominee of the 2017 (and my pick to win tonight’s biggest prize). Just before the movie came out, Mother Jones reporter Eddie Rios sat down with writer/director Jordan Peele, who just became the first African-American to win Best Original Screenplay. The interview was amazing and you should read it. —JM

10:51pm: Roger Deakins won best cinematography for Blade Runner Snore-a-thon and though that film made good on its name of being a real snore-a-thon congrats to Deakins, who won his first Oscar tonight after 14 nominations!

11:10pm: James Ivory it turns out is actually the oldest person to ever win an Oscar.

#Oscars: Call Me By Your Name's James Ivory becomes the oldest oscar winner ever at 89 https://t.co/5Itp8vyGfM pic.twitter.com/E2MWotAmQ2

11:16pm: Guillermo del Toro won for best director, which means that though this Oscars has been super boring I am very close to breaking my best Oscar pool record.

11:20pm: LMAO at the House of Cards trailer airing at the end of the #MeToo Oscars.

11:35pm: In another not-so-#MeToo moment, Gary Oldman won Best Actor. In 2001, Oldman’s wife at the time, Donya Fiorentino, filed papers in LA Superior Court claiming that Oldman assaulted her in front of their children. He denied the allegations.—JM

11:40pm: Frances McDormand won Best Actress and gave an empowering speech and mentioned an “inclusion rider” which i don’t know what that is but my sister summarized the takeaway nicely.

11:47pm: The Shape of Water won Best picture which whatever fine, but I thought Three Billboards was going to win which means I got four awards wrong tonight. 20/24! I watched this whole boring Oscars and didn’t even get 21 right!!!!!!

That’s it! I’m taking my meds and going to sleep. Goodnight and good luck.