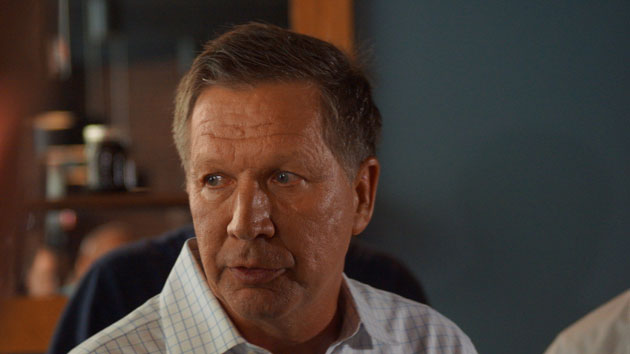 Ohio Governor John Kasich told reporters in New Hampshire on Friday that he considers the death penalty and long prison sentences a better approach than gun control when it comes to reducing the number of mass shootings.

Kasich, who voted for a federal assault weapons ban as a Republican congressman two decades ago, demurred when asked what steps Washington should take in the wake of the Thursday massacre at Umpquah Community College in Oregon that left 10 people dead. “I don’t believe that gun control would stop this,” he told a scrum of journalists after a town hall in Goffstown, during which the subject did not come up.

I think they have very tough gun laws in that state. The fact is that more and more people believe that they should be able to defend themselves. And if take guns away from people who are law-abiding the people who are going to cause these horrible things are still gonna have them. I don’t agree with that. That is not—you know I favor, in Ohio, the death penalty. I favor long prison sentences.That’s the way I would go.

When a reporter asked him what specifically he would do to curb mass shootings as president, Kasich said it wouldn’t be his responsibility. “I don’t think any president can stop mass shootings,” he said. “And again I think that all of these places that are soft targets need to be hardened. My own state, as I’ve said, it’s frustrating to see some school districts not taking it seriously. These are terrible tragedies and we need to find out more about who this person is. If this person’s had mental illness they should never have had a weapon. That’s the rules.”

In an earlier interview with NBC News, Kasich offered a clearer idea of what he means by hardening “soft targets.” He said he wants all schools, including universities, to implement warning systems that would allow them to go into “lockdown” mode if there is a campus threat.

Kasich’s emphasis on the death penalty is curious given that more than half of the perpetrators of mass shootings over the last three decades took their own lives. The number goes up if you count “suicide by cop”—that is, those instances when a shooter was killed by law enforcement.

Moreover, Ohio’s death penalty process is notoriously flawed. Last spring, a federal judge placed a seven-month moratorium on all executions in the state after a lethal injection left a convicted killer writhing on his deathbed for 25 minutes. On Thursday, an Ohio court struck down an inmate’s death sentence, citing flaws in the state case.