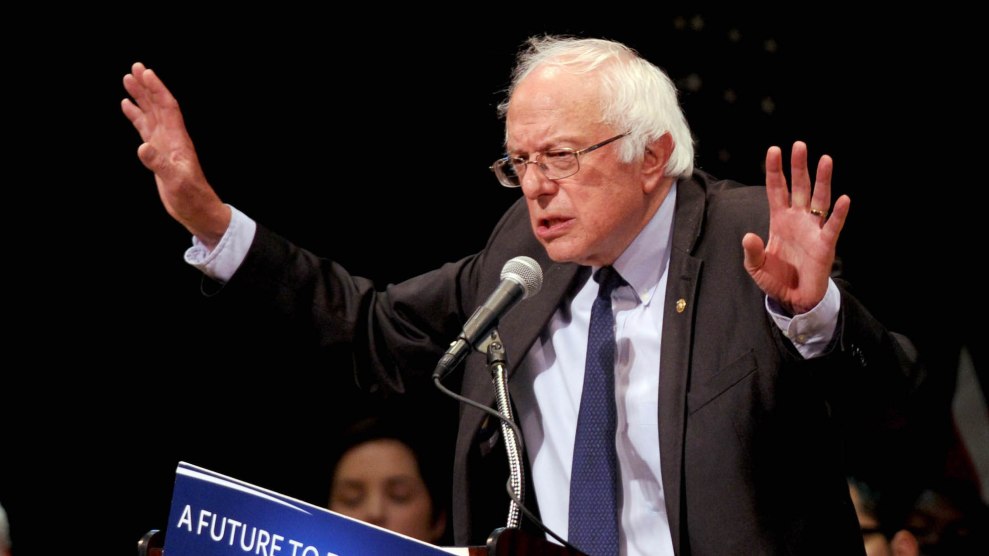 Bernie Sanders has won. Not the Democratic Party’s presidential nomination. Another candidate in the race collected millions more votes and secured a majority of delegates. But Sanders, the independent socialist senator from Vermont who has spent most of his political career running against Democrats, has achieved a tremendous ideological triumph. He has pushed—or pulled—Hillary Clinton, that other candidate, and the entire Democratic Party in a progressive direction, while proving that his anti-corporate, big-money-bashing populism of the left can inspire millions.

That’s a big deal. A two-term senator who had a small national following and not much influence on Capitol Hill prior to his presidential crusade has become a policy kingmaker. He now must ask whether what he has accomplished is good enough to allow him to turn to the task of defeating Donald Trump, the presumptive GOP nominee. Or does Sanders really believe he should continue his fight against Clinton and the party?

On Tuesday, Sanders told USA Today that he was preparing for a clash at the Democratic convention next month—that is, if the party does not embrace his more progressive stances on the minimum wage, trade, and climate change. He was essentially threatening at least three more weeks of intra-party squabbling, while the Clinton campaign and the Democratic establishment want to devote their attention and resources to the existential battle against Trump. In another interview that day, Sanders, who has said he will vote for Clinton, declared that Clinton has not yet passed the litmus test to win his endorsement.

Sanders, though, has said he will do whatever it takes to prevent Trump from reaching the White House. But that does not yet include ending efforts that might distract Clinton and the party from that goal. And here’s the thing: Sanders is still issuing something of a threat after he has succeeded in ensuring that the Democratic Party’s platform will be the most progressive it has been in decades.

Last weekend, the party’s platform drafting committee—which included representatives from the Clinton and Sanders camps—approved its final version of the platform, which will be presented to the full platform committee in a week and then to the full convention in Philadelphia. By any measure, it was a win for the Sanders crowd. True, Sanders’ crew did not prevail on all fronts; it failed to convince the committee to call for a fracking ban, a full repudiation of the Trans-Pacific Partnership, and certain changes in US policy toward Israel. But Team Sanders bagged several impressive wins.

The draft platform calls for raising the hourly minimum wage to $15 and abolishing the death penalty. (No previous Democratic platform has taken this position on state executions.) It urges the expansion of the Earned Income Tax Credit and a “modernized version” of Glass-Steagall, the tossed-aside law that once prevented traditional banks from engaging in risky actions that threaten the wider economy. It proposes a surtax on multi-millionaires and an expansion of Social Security. It reaffirms that health care is a right. It commits the United States to running entirely on clean energy by mid-century and champions Planned Parenthood. It calls for ending the “era of mass incarceration” and for supporting states that choose to decriminalize marijuana.

The platform is not entirely The World According to Bernie. But it’s a helluva lot closer to that than any political observer would have guessed a year ago. The influence of Sanders’ folks on the drafting committee—including scholar Cornel West, environmentalist Bill McKibben, and Rep. Keith Ellison of Minnesota—is rather obvious. They have steered the party to the left.

Sanders now faces a stark calculation: Are the policy gains that could be obtained by continuing the fight to Sandersize the platform worth the potential discord that could come from not closing ranks with Clinton to combat Trump? To pocket additional wins, Sanders has to threaten floor fights and debates that could suck up time and attention at the convention. It seems probable that Sanders will eventually come around and lead as many of his supporters as possible to vote for Clinton. Yet he is drawing out this process and needling the Clinton camp. To what end? Will he win platform fights on trade, the Middle East, and other matters at the convention? Maybe, but he won’t have a majority of the delegates. And what will be the cost of such battles? Also, to what degree does the platform truly matter? How many presidents or legislators feel beholden to a platform? It is also conceivable that should Sanders lead an all-out battle on these subjects, the final outcome could be disappointing to his supporters. If Sanders does not win these squabbles, some of his voters might then feel less inclined to be with her.

Sanders has reshaped the party and its platform in a stunning fashion, and he deserves much credit for that. But he appears to want to go further. At this stage, attempting that could hinder the effort to unify the party and focus it on the No. 1 job of stopping Trump. Clinton partisans are obviously eager for Sanders to declare victory and to fixate on defeating Trump. That’s natural; they’ve had enough of Sanders and don’t want to be bothered further. But he has his own reasons to claim success and to become a full partner in Clinton’s anti-Trump endeavor. With Trump posing a serious threat to much of what progressives hold dear, Sanders and his backers, as they weigh whether to keep fighting the Dems for additional policy gains, might want to keep in mind that doing so could become a drag on the campaign against Trump and also tarnish the brilliant win Sanders has already attained. After all, a more progressive Democratic Party platform will mean little if Trump seizes the White House.