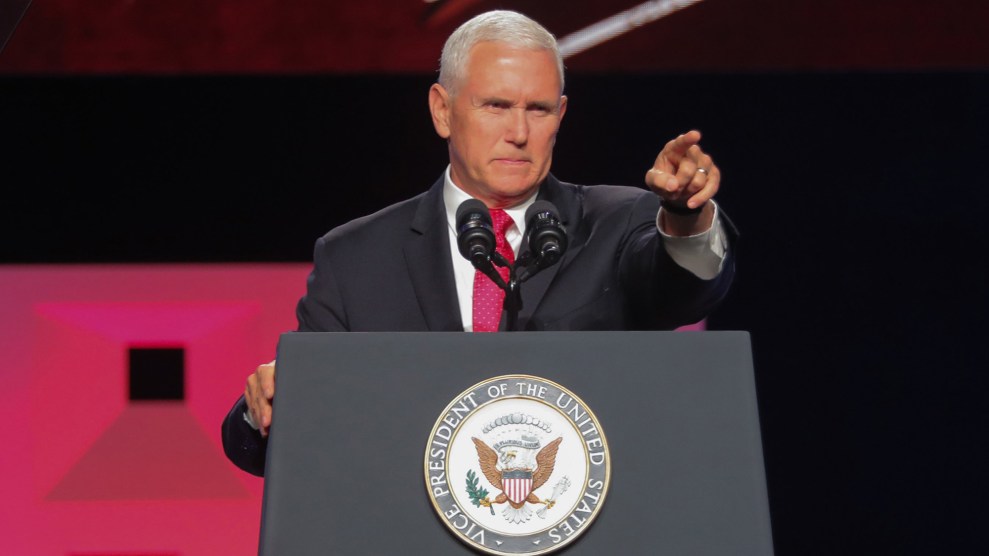 Vice President Mike Pence campaigned for Georgia gubernatorial candidate Brian Kemp on Saturday in the final days of the GOP’s primary run-off. Pence arrived late, coming from Tennessee, where he stumped for Republican Senate hopeful Marsha Blackburn among other candidates, forcing Kemp to take the stage first and then introduce him.

“I really do believe Brian Kemp will bring the kind of leadership to the state house that President Donald Trump has brought to the White House,” Pence told the cheering crowd in Macon, Georgia.

President Trump announced his endorsement of Kemp, the Republican secretary of state and far right candidate, in a tweet earlier in the week.

Kemp embraced Trump’s endorsement wholeheartedly. “As governor, I will unapologetically stand with President Trump to secure our border, deport criminal aliens, crush gangs and ensure a bright and promising future for our families,” he said in a statement. At Saturday’s rally, Kemp claimed the support of Trump and Pence had created a “Kemp surge.”

Kemp made it into the run-off against current lieutenant governor, Casey Cagle, by running a far-right campaign in the primary and focusing on the key Trump issues. Kemp gained notoriety nationwide when he released an ad in which he suggests he would engage in vigilantism against immigrants. “I got a big truck,” he said, climbing into a pickup truck, “just in case I need to round up criminal illegals and take ’em home myself.” Kemp has also campaigned on his record of fighting the Democrats who are trying to “undermine the integrity of the ballot,” he said an event in April. If Kemp wins, voting rights could become a major issue in the race.

The winner of the GOP primary will face Democrat Stacey Abrams in November. Abrams, the former state House minority leader, would be the first black female governor in the country. Abrams and Kemp have had a long history, having clashed for years particularly over voting rights. As Georgia’s two-term secretary of state, Kemp has been a passionate advocate for imposing voter ID laws as a way to stop voter fraud—though there are very few cases of in-person fraud. Abrams has opposed voter ID as a means of disenfranchising minority voters, which studies have demonstrated they do.

Pence’s speech was more about Trump than Kemp. But the vice president praised the Georgia candidate for being on the same page as Trump on every issue, from supporting law enforcement, ICE, gun rights, and the military. “Brian Kemp,” Pence announced, “is the real deal.”