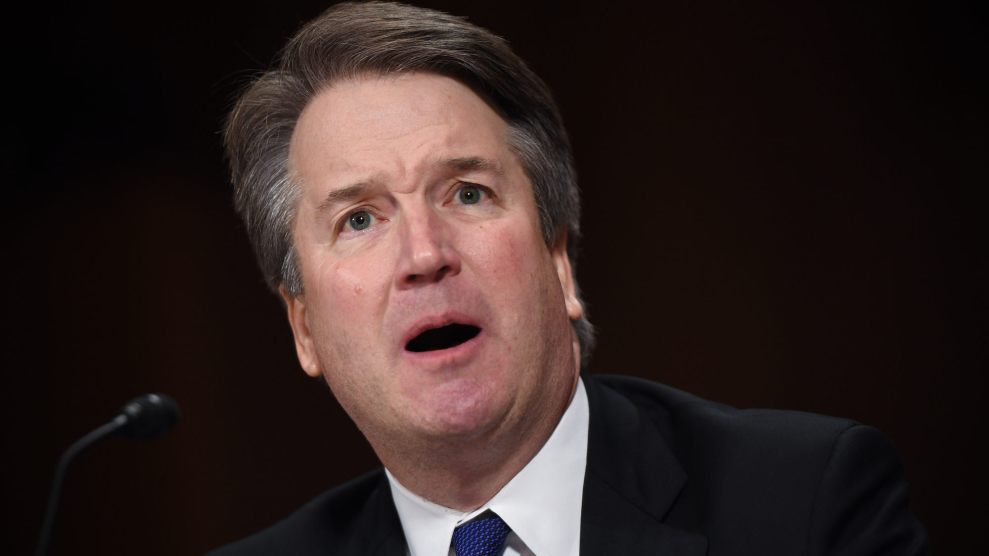 In spite of the sexual assault allegations against him, Brett Kavanaugh is set to receive a Senate vote on Saturday confirming him to the Supreme Court. Since Christine Blasey Ford came forward three weeks ago with her account of an attempted rape, attention has focused on alleged Kavanaugh transgressions involving sex and alcohol. But from the moment Trump put his name forward, Mother Jones has been reporting on numerous other episodes from his past that make him a potentially problematic pick for a lifetime appointment to the country’s highest court.

Here are 10 other things he’s done that could undermine his credibility as a justice:

1. He appears to have lied repeatedly to Congress while under oath. And that was before he was asked about drinking and the Beach Week Ralph Club.

2. He made Russian election interference easier and Robert Mueller’s job harder. In a 2011 ruling, he gutted part of a law restricting foreign influence in US elections.

3. His finances are the murkiest of any recent Supreme Court nominee. He’s refused to explain where he got the money to buy an expensive house, join an exclusive country club, and pay off his substantial debts.

4. He believes assault weapons can’t be banned because they’re “common.” And he defended that opinion in his confirmation hearing.

5. He has close ties to a disgraced judge accused of repeated sexual misconduct. Past clerks of former Judge Alex Kosinski say Kavanaugh’s denials that he knew anything about the judge’s transgressions strain credulity.

6. He wanted to ask Bill Clinton extremely lewd questions. His aggressive work for Ken Starr’s investigation into the president’s relationship with Monica Lewinsky could help explain the hostility toward “the Clintons” he demonstrated before the Senate Judiciary Committee.

7. He has a track record of ruling for whoever’s more powerful. A study found that he backs federal agencies only when doing so helps big corporations.

8. He’s not a fan of affirmative action. Newly released emails show he took a dim view of a government program to support minority-owned businesses.

9. There are serious questions about his judicial temperament. Can he really be an impartial justice after his tirade before the committee against Democrats and “the Clintons”?

10. He could undo efforts to restore the Supreme Court’s integrity. Chief Justice John Roberts has tried to avoid displays of naked partisanship from the bench. Kavanaugh’s appointment and actions as a justice could negate all that.