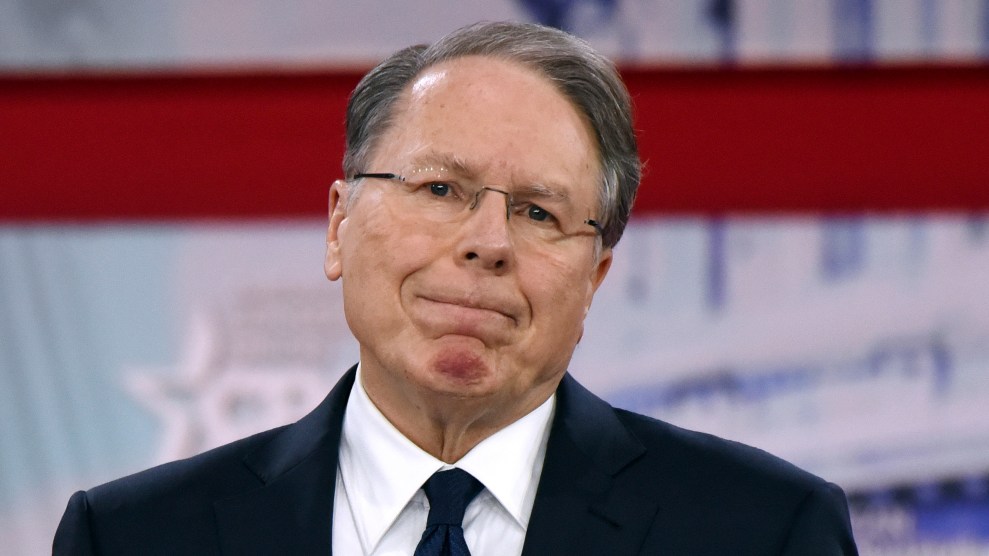 The National Rifle Association paid more than $100,000 in personal expenses for an official who is now leading an austerity campaign within the organization, new tax filings show.

The official, Josh Powell, is the NRA’s executive director for general operations. The Trace and Mother Jones reported two weeks ago that Powell, along with the NRA’s new treasurer, Craig Spray, is seeking to impose steep cuts to the gun group’s budget. The effort is so stringent that the NRA did away with free coffee and water coolers in its Fairfax headquarters, causing consternation among NRA staffers. On Wednesday, NRATV staffer Cameron Gray announced on Twitter that he and “several colleagues” had been laid off.

According to the NRA’s latest tax filing, released earlier this month, Powell’s total compensation for 2017 was almost $800,000. Of that, the records say, $102,484 took the form of “taxable personal expenses.” Another executive, Todd Grable, generated more than $132,000 in expenses, the documents show. The filings do not specify the type of personal expenses that were paid, but an NRA spokesperson told The Trace that it provides “corporate living arrangements” for Powell “so that he may maintain a home near headquarters and address the personal living needs of his family in Michigan.” (The returns disclose for the first time that the NRA pays housing costs for a total of four unnamed executives.)

A Trace investigation into Powell’s business history published last month revealed a long trail of defaulted debts, including 20 lawsuits for more than $400,000 from unpaid vendors.

It is not unheard of for companies or nonprofits to pay some personal expenses—car payments, housing, travel—of sought-after executives. But experts say the scale of expenses covered for Powell and Grable is highly unusual. Previous NRA tax returns have not disclosed what, if any, portion of executive compensation was reimbursement for personal expenses.

“It’s truly unusual that an executive from a nonprofit would be able to command that sort of additional income. It’s a very large amount, and an extraordinary admission.”

“The fact that the NRA made no effort to argue that they were work-related personal expenses means they really were personal,” said Marc Owens, a former head of the IRS division overseeing tax exempt enterprises. “It’s truly unusual that an executive from a nonprofit would be able to command that sort of additional income. It’s a very large amount, and an extraordinary admission.”

The NRA’s 2017 tax filings contain much more detail than they have in for prior years, laying bare financial arrangements and transactions that had previously been opaque. One puzzling disclosure regards the compensation of a former executive, Michael Marcellin, who was the NRA’s managing director of affinity and licensing. Marcellin’s duties included managing special offers for members, such as insurance products like the controversial Carry Guard program, which sparked multiple investigations from state insurance regulators, including New York and Washington. Carry Guard was administered by a firm called Lockton Affinity, which split revenue from the product with the NRA. Lockton cut ties with the NRA after February’s mass shooting in Parkland, Florida, and the two faced off in a (since settled) lawsuit.

The 2017 tax returns identify Marcellin as a “former” employee, yet they indicate that he received a base salary of  $522,426 from the group last year. Supplemental notes, however, say that he received precisely the same amount — $522,426 — from “an unrelated organization, Lockton Affinity LLC.” The notes also say Marcellin received $455,000 from Lockton in 2016, a detail that was “inadvertently excluded” from the prior year’s tax records. In 2016, Marcellin was still a fulltime NRA employee, earning a total of nearly $630,000, according to that year’s filing.

Three nonprofit tax law experts consulted by the Trace said they could not fathom why the income was paid by Lockton, or why it was disclosed by the NRA. “I don’t know why they’re reporting that,” said Philip Hackney, a professor at the University of Pittsburgh Law School who specializes in nonprofits. “It wouldn’t seem to fit, since it’s not a related organization, so you wouldn’t put that in. But they put it in. Reporting unrelated entity income is more than a belt and suspenders approach.”

Marcellin did not return a message seeking comment. A spokesman for the office of the Washington state insurance commissioner, which has been investigating Carry Guard, told us, “Washington insurance law does not allow compensation to an NRA employee for soliciting, selling or negotiating coverage,” but that the payments would be legal if they were reimbursements for other services.

Other disclosures in the returns include a $32,000 payment to board member and former president David Keene, who has been closely associated with the alleged Russian spy Maria Butina. Keene visited Moscow in 2013 to attend the annual meeting of a pro-gun group founded by Butina, and has been a longtime associate of Butina’s boyfriend, Paul Erickson. Reached by a reporter, Keene said only, “I don’t talk to The Trace. Merry Christmas.”

An NRA spokesperson declined to explain the payments to Marcellin, saying only that he “has obviously been a long-time supporter of the NRA. We appreciate his ongoing partnership and support on many fronts.” He said that Keene had been paid a “nominal compensation” for representing the NRA at public events.

“Maybe they were anticipating the Democrats taking the House, so they’re coming clean with some of this stuff now.”

The filings come at a time when the organization finds itself, by its own admission, in a precarious financial state. Last year, total revenue fell by almost $55 million, and yet overall executive compensation increased by $1.2 million. The NRA recently rolled out its second dues increase in two years, and has claimed that regulatory efforts in New York against its Carry Guard insurance program have cost the gun group “tens of millions of dollars” in lost income, legal fees, and other damages.

As it has in previous tax returns, the NRA disclosed that in 2017 it paid its longtime PR firm, the Oklahoma-based Ackerman McQueen, just over $20 million for “public relations and advertising.” But this year, in supplemental notes, the NRA noted that the true amount paid to Ackerman McQueen was nearly twice that, including more than $11 million for “media, outside vendor costs, and reimbursement of travel and business expenses;” $5,588,945 to Ackerman McQueen’s Washington, D.C., office, which operates under the name Mercury Group; $2.5 million paid by the NRA’s affiliated foundation; and $2,635,000 paid to an Ackerman-related production company called Under Wild Skies.

For decades, some NRA employees have complained that Ackerman McQueen consumes too much of the NRA’s budget. The firm strongly influences much of the NRA’s incendiary messaging, and produces various programs that appear on NRATV.

Ackerman’s website calls the Mercury Group a “subsidiary specializing in public relations and crisis communication.” Mercury’s president is Tony Makris, who is also the president of Under Wild Skies, which is also the title of a hunting show hosted by Makris that appears on NRATV. Corporate records show that, through 2017, the treasurer of Under Wild Skies was Tyler Schropp, the executive director of the NRA’s office of advancement, a position he has held since 2010. Before that, Schropp was an executive vice president at Mercury Group.

The return also provides new details about the NRA’s conflict-of-interest policy. Previous returns merely stated that the group “takes conflicts of interest very seriously” and that conflicts are reviewed by the office of the secretary and general counsel. The latest return describes the process for identifying conflicts, and the procedure for adjudicating them.

Experts say that the NRA’s motivation for the newfound transparency on its tax returns might not have anything to do with the IRS.

“I don’t think there’s anything in here that would have triggered anything with the IRS,” says Hackney. “It doesn’t strike me that this is for IRS eyes. The conflict of interest policy — conflict issues are something that a state attorney general would go after. Maybe they were anticipating the Democrats taking the House, so they’re coming clean with some of this stuff now.”

Asked if the NRA was the subject of any state or IRS investigations, the spokesperson said: “As has been publicly reported, the NRA is cooperating with an inquiry from the New York State Department of Financial Services and certain other state regulators. With respect to questions about our tax filings, the NRA has always operated in compliance with all applicable federal and state regulations — and will continue to do so. We determined that we would provide additional information in our 2017 990s — in an effort to offer greater visibility into the dealings of the association and its foundation. The fact remains that the NRA’s finances have long been an open book and a matter of public record.”

(Mother Jones and the Trace have teamed up to further investigate the NRA’s finances and political activity. See more of our reporting here.)