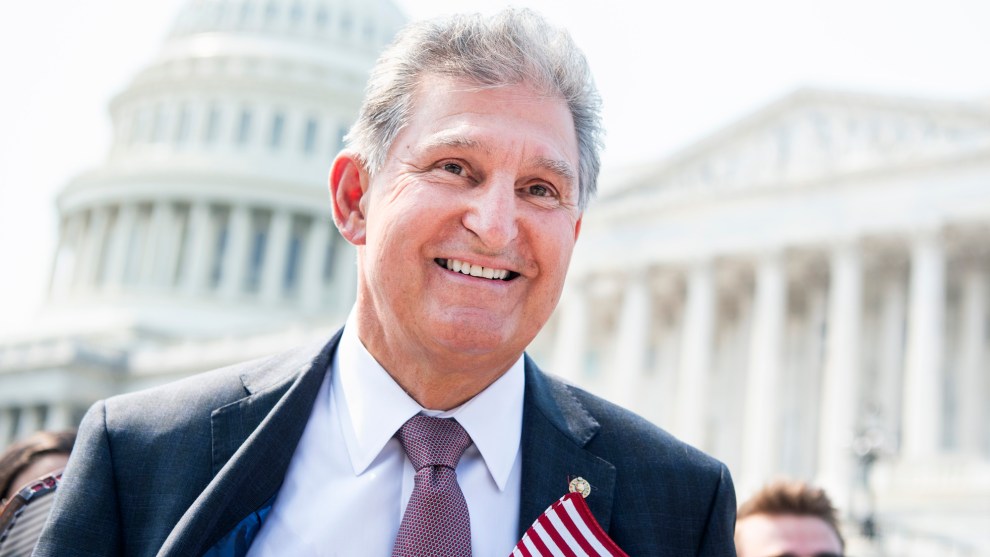 Sen. Joe Manchin, D-W.Va., talks with reporters after a remembrance ceremony on the east front steps of the U.S. Capitol for the 20th anniversary of the 9/11 terrorist attacks on September 13, 2021. Tom Williams/CQ Roll Call via AP

A key group of Democratic senators, including centrist Joe Manchin (D-W.Va.), introduced a new voting rights bill on Tuesday that would expand access to the ballot for millions of Americans, ban partisan gerrymandering, and crack down on dark money groups. It’s expected to receive a vote in the Senate as soon as next week, setting up a showdown with Republicans who intend to block it and a reckoning within the Democratic caucus over whether to reform the filibuster to pass it.

The new Freedom to Vote Act preserves many of the major provisions of the For the People Act, the Democrats’ sweeping democracy reform bill that was filibustered by Republicans in June and August. These measures include policies for federal elections that would expand voting access, such as automatic and Election Day voter registration, two weeks of early voting, making Election Day a national holiday, and ensuring that all voters can request a mail-in ballot and have access to mail-ballot drop boxes. It also mandates standards for redistricting that would ban partisan gerrymandering and adds new provisions preventing the subversion of traditional election administration by protecting nonpartisan election officials from partisan interference. To win the support of Manchin, the bill sets new standards for states that require voter ID to cast a ballot and clarifies how states can remove voters from the rolls.

“The right to vote is fundamental to our Democracy and the Freedom to Vote Act is a step in the right direction towards protecting that right for every American. As elected officials, we also have an obligation to restore peoples’ faith in our Democracy, and I believe that the commonsense provisions in this bill—like flexible voter ID requirements—will do just that,” Manchin said in a statement on Tuesday.

But how and if it will pass remains an open question. Manchin has been shopping the bill to Republicans, but no GOP senators signed on to the bill’s release and it’s a near certainty it will not receive the votes of 10 Republicans needed to break a filibuster, given how Republicans at the state level are engaged in the greatest roll back of voting rights in decades and are soon set to draw new redistricting maps that will entrench their power for the next decade and could allow them to take back the US House through extreme gerrymandering alone.

While many Democratic senators have expressed an openness to reforming the filibuster to pass voting-rights legislation, Manchin has steadfastly refused, saying on Monday that “the filibuster is permanent.” At the same time, many Democrats don’t believe Manchin would have spent months negotiating a new voting rights bill, only to see Republicans kill it and do nothing in response.

President Joe Biden reportedly told Senate Majority Leader Chuck Schumer and Speaker of the House Nancy Pelosi he was ready to embrace filibuster reform and lobby moderate Democrats to support an exception to the filibuster for voting rights legislation.

For the past year there’s been a striking asymmetry in tactics between Republicans in the states and Democrats in Washington. Republicans have been passing an onslaught of voter suppression laws at the state level through simple majority, party-line votes while Democrats in Washington continue to insist that no legislation protecting voting rights can pass unless it attracts a bipartisan supermajority.

The net effect is that 21 states have passed 52 new laws in 2021 making it harder to vote, while Democrats have passed no federal legislation to stop it.

With redistricting underway in many states, time is running out for Democrats to reverse the GOP’s anti-democratic tactics. They can preserve the filibuster or protect democracy, but it’s increasingly clear they can’t do both.