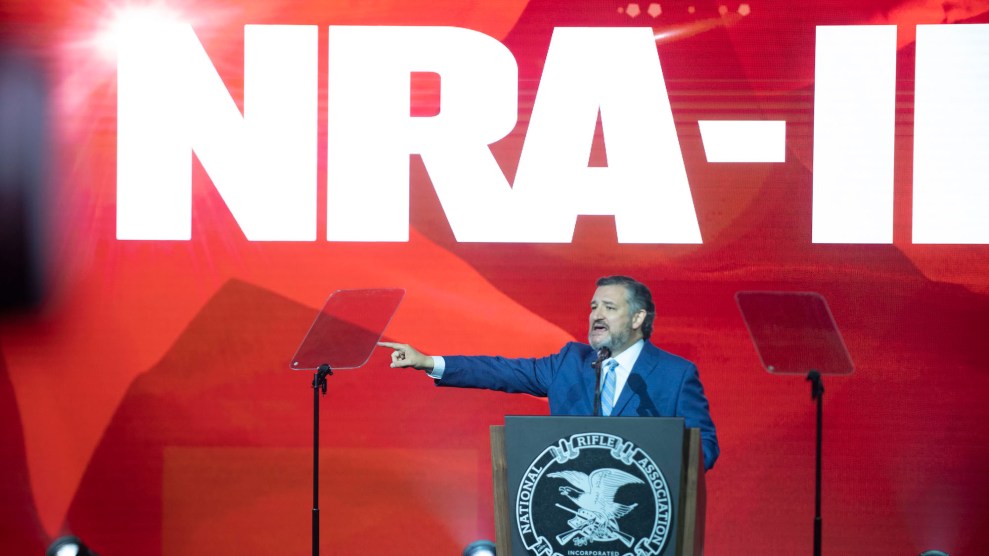 The nation has been plunged into despair and mourning. A little more than a week after the slaughter of 10 people by a white supremacist in Buffalo, a gunman killed 19 children and 2 adults in Uvalde, Texas, as police stood by in what seems a glacial and incompetent response. The tragedies renewed calls for gun control. In a national address, President Joe Biden called for a coordinated response to take on the gun lobby. Democratic legislatures have moved to pass gun control legislation at the state level.

And in Houston, the National Rifle Association still threw a party. Despite the tragedies, the NRA’s annual national convention went ahead this weekend. It was, as my colleague Inae Oh wrote, déjà-vu. After the Columbine shooting in 1999, the NRA decided to still hold its convention in Colorado.

Two messages emerged from the assembled throngs and the doting politicians in attendance, just 300 miles from Uvalde: 1) People must continue to enjoy the right to acquire any damn firearm they choose, without meddling from the state; and 2) the massacre had absolutely nothing—not a thing!—to do with the untrammeled commerce in guns. And may in fact have been a staged conspiracy meant to trigger crackdown on this inalienable (and yet recently invented) right .

A couple of NRA-worshipping politicians (Texas Gov. Greg Abbott and Sen. John Cornyn) found the prospect of whipping up fervor for gun acquisition just three days after bullets killed 19 children and two teachers just a bit much, and backed out of scheduled appearances. Former president Donald Trump would not be so deterred. In a rambling hour-long performance that “devolved into a stump speech,” Politico reported, the former president took a poke at his peers who had proven too delicate to appear under the circumstances. “Unlike some, I didn’t disappoint you by not showing up,” Trump told the the cheering crowd.

He went on to analyze the Uvalde shooter’s act as one of “evil”—and cite it as a reason for Americans to buy and carry more arms. He conjured a future of schools as war zones, teeming with gun-packing teachers (who should be “able to handle” active shooters) and armed-to-the-teeth cops. “Congress should vote immediately to take back every penny of unused Covid relief money … take it back from the states and use that money to quickly establish impenetrable security at every school all across our land,” he declared. And he vowed—suggesting a restoration of his presidency in 2024— to “crack down on violent crime like never before.”

Texas Sen. Ted Cruz—a staunch Trump ally but a potential rival in 2024—denounced the “elites who dominate our culture, [who] tell us that firearms lie at the root of the problem,” The Washington Post reported. The “real goal” of many politicians on the left “is disarming America.” He added: “It’s far easier to slander one’s political adversaries and to demand that responsible citizens forfeit their constitutional rights than it is to examine the cultural sickness, giving birth to unspeakable acts of evil.” In short, guns don’t kill people; something called “evil” kills people. And the only antidote to it is more guns.

South Dakota Governor Kristi Noem—also a Trump acolyte and possible rival to the GOP throne—delivered perhaps the most unhinged rant of all. She insisted that that the “woke mob” is using the Uvalde atrocity as an excuse to end gun rights. Bizarrely, she suggested that the US founders might have been moved to construct the Second Amendment as a response to the French Revolution, according to an account in Newsweek. “In Paris, which was the center of European learning and culture for a thousand years, mobs tore down statues and crosses,” the governor recounted. “Does that sound familiar?”

In her tortured logic, the French monarchy had fallen to a “woke mob,” and could have maintained power … if only more citizens had been packing guns, which presumably they would have used to shoot the revolutionaries. She continued:

We have seen the same type of radical mob mentality taking place on the streets of American cities that swept Paris in the 1790s.

Woke mobs are tearing down statues, and it doesn’t matter who they are of. Our founding fathers, Catholic missionaries. They even wanted to come after Mt. Rushmore. Well not on my watch.

“Why did it happen three days ago?” asked Jim Hollis, a lifetime NRA benefactor from St. Louis. “I’m not sure that there are not forces someplace that somehow find troubled people and nurture and develop them and push them for their own agendas.”

Thus, rather than spark a national reckoning on the recent explosion in gun sales, including the assault rifles preferred by mass shooters, the carnage of children in Uvalde instantly became enmeshed in the forever culture war. And the gun nuts who assembled in Houston are winning. Despite their shrieks of grievance, Congress shows no sign of acting to regulate gun access. And the gun-loving Republican Party looks set to clean up in the November midterm elections.