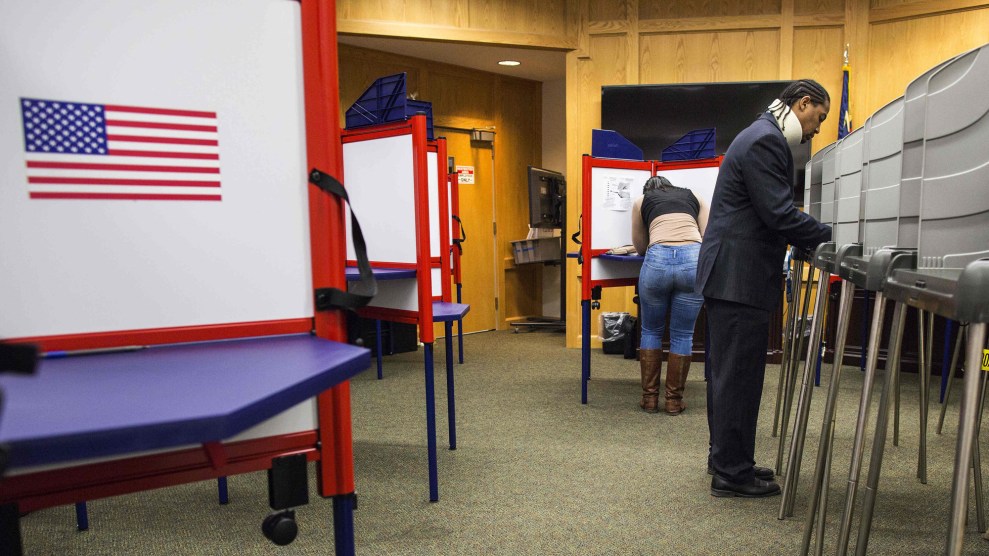 Update, 8/16/16, 12:04 p.m.: North Carolina Gov. Pat McCrory formally asked the Supreme Court late Monday night to reinstate the state’s voter ID law. “Allowing the Fourth Circuit’s ruling to stand creates confusion among voters and poll workers and it disregards our successful rollout of Voter ID in the 2016 primary elections,” McCrory said in a statement. “The Fourth Circuit’s ruling is just plain wrong and we cannot allow it to stand. We are confident that the Supreme Court will uphold our state’s law and reverse the Fourth Circuit.”

Over the last month and a half, voting rights advocates have scored a string of legal victories against state-level voting restrictions in North Carolina, Wisconsin, Texas, Kansas, Ohio, Michigan, and North Dakota. Still, for many voters, the rules for Election Day remain in flux.

“There’s a lot of uncertainty on what the rules are going to be, and we’re getting closer to the early voting period,” says election law expert Rick Hasen. “That kind of uncertainty creates problems.”

Where do the problems begin? First, it will be up to state and local election officials to inform voters of their rights months before the general election. On Wednesday, nearly three weeks after a federal appeals court determined that Texas’ voter identification law had a discriminatory effect on black and Latino voters, state officials reached an agreement that gave people the option to sign a form stating they had a “reasonable impediment” in acquiring a photo ID to vote in November. (Texas Attorney General Ken Paxton has said he planned to appeal the decision in the future.)

As part of the arrangement, Texas officials agreed to allocate $2.5 million toward an education campaign to let voters know about the changes. Poll workers would have to know that voters can cast ballots without an ID, leaving open the potential for confusion on Election Day, Hasen says. “There are a lot of polling places in Texas,” he adds. “It’s going to take a lot of effort to get the word out.”

“There are a lot of polling places in Texas. It’s going to take a lot of effort to get the word out.”

Restrictive voting laws in Wisconsin and North Carolina also went in front of federal judges earlier this summer. In late July, a federal appeals court found that North Carolina’s voter identification law was passed with “discriminatory intent” that burdened African American voters “with almost surgical precision.” The ruling brought down numerous provisions that included instituting new identification requirements, eliminating same-day voter registration, and reducing the time for early voting, among others. The decision has left it up to county election officials to decide how long voters will have during the early voting period to cast their ballots as state officials prepare for a high voter turnout. Meanwhile, Gov. Pat McCrory said he plans on appealing the decision to the Supreme Court.

Last Wednesday, a panel of federal judges took a different tack in Wisconsin, putting on hold a lower-court ruling that let voters without the necessary ID sign a form showing that they had reasonable issues with obtaining an ID. They concluded that the case would “likely to be reversed on appeal and disruption of the state’s electoral system in the interim will cause irreparable injury.” A federal judge in a separate case found that several of Wisconsin’s voting restrictions were unconstitutional and that its voter ID rules should be changed. The appellate panel decision effectively ensures Wisconsin voters operate under the state’s voter ID law, pending an appeal to the 7th Circuit or the Supreme Court.

Now, with the general election quickly approaching, those hoping to further shape the voting rights landscape via the courts have only a few weeks left to appeal their cases. The ACLU filed a petition on Thursday to get the entire 7th Circuit to rule on the case in Wisconsin. In the North Carolina case, Hasen notes, the court gave its decision in late July under the state’s assurances it could comply with any possible changes ordered before the November election. It’s been 17 days and counting since the decision came down, and the state has yet to file an appeal.

In the past, the Supreme Court has issued emergency stays on orders shortly before elections. A month before the 2014 midterm elections were set to begin, for example, the justices took action in three familiar cases involving North Carolina, Texas, and Wisconsin. The justices blocked Wisconsin’s attempt to implement its strict voter ID law, yet permitted Texas’ and North Carolina’s voting restrictions to continue for the midterms without an opinion. A stay in the more recent North Carolina’s case “threatens to confuse voters further, and to make election administrators’ life hell,” Hasen wrote in a recent blog post.

And this time around, timing isn’t the only question for the justices. With the Supreme Court currently divided after the death of Antonin Scalia, last-minute challenges before the justices could result in split decisions that could ultimately empower the lower courts’ decisions. “Everyday it’s a different set of rules,” Hasen says, “so you can’t really have a concerted education effort until you have some finality.”