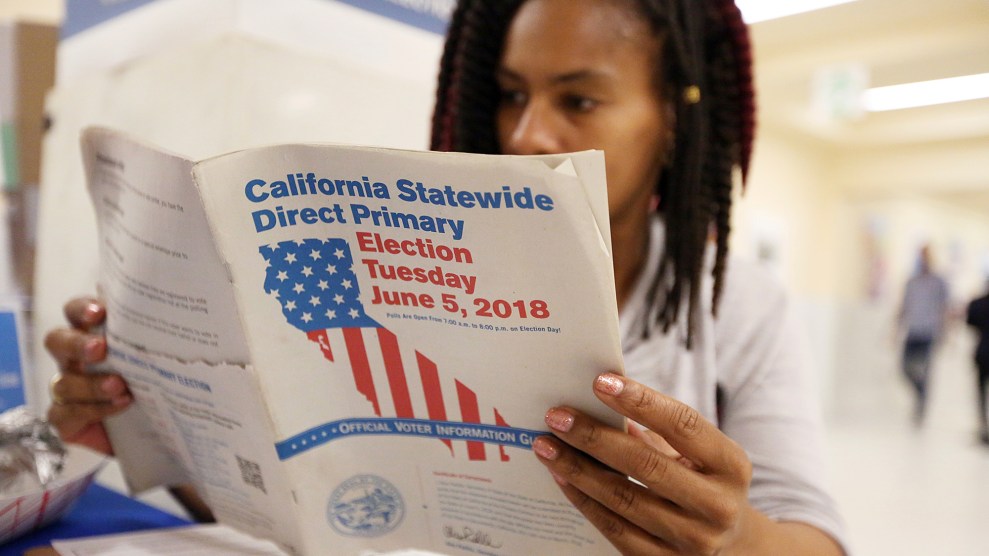 In January 2017, the Democratic Congressional Campaign Committee released a list of 59 House seats it planned to target in the 2018 midterm elections. Among them were the “California Seven”—7 of the 14 Republican-held districts in the state that went to Hillary Clinton in 2016. They represented the Democrats’ best opportunity for flipping seats from red to blue and, they hope, helping take back the House come November.

Much is at play in these races. They are in traditionally Republican strongholds, but some have been becoming bluer due to changes in demographics and the collapse of party loyalties in the Trump era. (Independents are now the second-largest political affiliation in California, unofficially relegating the Republicans to third party status.)

And the stakes in yesterday’s primary were especially high because of California’s unconventional “jungle primary” system, which allows voters to cast a ballot for any candidate, regardless of party, and sends the top two vote-getters to the general election. In several of these districts, several Democrats stayed in the race until Tuesday, increasing the risk that Democratic votes would be spread too thin, advancing two Republicans to the general election.

As of Wednesday morning, it looked like the Democrats had avoided any shutouts in these key districts. Yet several Republicans made strong showings, pulling in more than half the votes. Here’s how eight of those races played out:

Rep. Dana Rohrabacher, the Republican lawmaker Politico dubbed “Putin’s favorite congressman,” won this coastal Orange County district by more than 15 percentage points in 2016, even as most of his constituents voted for Clinton. Fired-up liberal activists in the district and the Democratic establishment worked hard to recruit a strong challenger, but they wound up with too many: 16 names were on the primary ballot, including four candidates who had dropped out of the race too late to be removed. And when local Republican Scott Baugh threw his name in the race on the last day to file, the Democrats suddenly faced a serious top two threat.

It has been an ugly race. Since late 2017, the two Democratic front-runners, stem cell researcher Hans Keirstead and businessman Harley Rouda, have traded jabs at each other, often spilling out in humiliatingly public ways. Both suffered the consequences of attack ads and opposition research. Keirstead landed the state Democratic Party endorsement, but Rouda was endorsed by Indivisible 48, a grassroots organization largely responsible for the energetic activism that has sprung up in the district since President Donald Trump’s election.

On Tuesday afternoon, Aaron McCall, chair of Indivisible 48, was out canvassing for Rouda. When asked what would happen if Keirstead made it through the primary and Rouda didn’t, he said, “Then we back Keirstead. We are for backing progressive people. Dana Rohrabacher is not a progressive person. He doesn’t believe in climate change. He just recently was saying that it can be religious freedom to deny gay people housing.” As of Wednesday morning, Rouda was in second place, with just 70 more votes than Keirstead. Rohrabacher had 30 percent of the vote, and Baugh was in fourth place with 16 percent.

Rep. Darrell Issa, a Republican political lightning rod and the richest man in Congress, announced he is retiring this year. So far, the race to replace him has been unpredictable. “The polls are all over the place here,” Francine Busby, chair of the San Diego County Democratic Party, said Tuesday afternoon.

The race for the 49th District, which straddles northern San Diego County and southern Orange County, has been defined by money. There were two multimillionaires on the Democratic side: Sarah Jacobs, a former Clinton campaign aide with a net worth of more than $11.3 million, and Paul Kerr, who wasn’t afraid to throw around significant chunks of his almost $40 million fortune on attack ads, targeting Jacobs and environmental attorney Mike Levin, also a Democrat. The attacks sparked anger among Democrats who feared the top two threat. Another Democrat, retired Marine Colonel Doug Applegate, narrowly lost to Issa in 2016.

Rocky Chavez, a Republican state assemblyman, was long considered the front-runner until Diane Harkey, a member of the California State Board of Equalization, landed the Republican Party’s endorsement. Early on, Issa endorsed her run.

Harkey placed first with 25 percent of the vote. Levin came in second with 17 percent. Despite his big spending, Kerr got just 5 percent.

Democrats didn’t face a top two threat in this district in California’s agricultural Central Valley. Rep. Devin Nunes, the chair of the House Intelligence Committee, is the only Republican in this race. Of the three Democrats fighting to unseat him, only one, Fresno prosecutor Andrew Janz, was expected to make it through the primary. As of Wednesday morning, he had garnered 32 percent of the vote.

On Tuesday afternoon, Bob Whalen, the Republican mayor of Clovis, told Mother Jones that Nunes’ performance would say a lot about his chances in November. “From my view, if Devin is at 66 percent or higher, then I think Andrew is kinda done. If Devin is below 50, then it could be that Devin is done. It’s probably going to be in between there.” Sure enough, Nunes got 58 percent of the vote.

Nunes has captured more than two-thirds of the vote in seven of his eight elections. Since the 2016 election, when he was reelected with 68 percent of the vote and when Trump took the district by a nearly 10-point margin, he has faced mountains of criticism. He’s been called “Trump’s stooge” by his local paper and has become infamous for his overhyped secret memo and “midnight run” to the White House to push the conspiracy theory that the Obama administration authorized the “unmasking” of Trump campaign officials. Yet he is in a safely Republican district, and dethroning him will be a challenge for Janz, the first Democratic candidate to make a serious showing against Nunes.

When asked about Janz’s chances of beating Nunes in November, Mariann Hedstrom, chairman of the Tulare County Republican Party, says simply, “I don’t see that happening at all.”

Clinton beat Trump by more than 5 percentage points in this Orange County district in 2016, yet Republican Rep. Mimi Walters won reelection by more than 15 percentage points. She faced four Democrats in the primary, including Brian Forde, a former Republican who served as a science advisor to Obama, as well as two law professors at the University of California-Irvine: Dave Min, a moderate Democrat who won the California Democratic Party endorsement, and Katie Porter, whose supporters include Sens. Elizabeth Warren and Kamala Harris.

As of Wednesday morning, Walters had 53 percent of the vote and Porter was a distant second with 20 percent.

Rep. Ed Royce won his last reelection bid by 15 percentage points. But the chairman of the Foreign Affairs Committee, known as a hawk and free-trade advocate, announced in January he would not be running for reelection.

Clinton won this district by 9 percentage points in 2016, and the district reflects California’s larger demographic shifts. Its growing Latino and Asian populations have made it a majority-minority district. Kim came in first with 22 percent of the vote; Cisneros was close behind with 19 percent.

In 2016, Republican incumbent Rep. Jeff Denham won his reelection bid by just 3.4 percentage points, about the same as Clinton’s narrow win in his Central Valley district. He faced six Democratic candidates and one Republican challenger. His main opponents were Josh Harder, the 31-year-old venture capitalist behind Blue Apron; Virginia Madueño, the former mayor of Riverbank and the daughter of immigrants; and Michael Eggman, a beekeeper who was making his third attempt to oust Denham. Denham won the primary with 38 percent of the vote; Harder got 16 percent.

Incumbent Republican Rep. Steve Knight, a member of the House Science Committee, faced off against four Democrats in his district just north of Los Angeles. They included Katie Hill, a first-time candidate who runs a homeless services nonprofit and was the subject of a Vice News Tonight special that drew headlines for a sex joke she made aimed at one of her workers; Bryan Caforio, a lawyer who ran in 2016 with labor and progressive endorsements and who has been taken to task for running a negative campaign; and Jess Phoenix, a 36-year-old volcano scientist.

Knight was considered one of the most vulnerable Republican incumbents in the country, according to the Cook Political Report. He still received 53 percent of the primary vote, while Hill took 20 percent.

Clinton took this Central Valley district by 16 percentage points in 2016, and Democrats have an 18-point advantage there. Yet Rep. David Valadao, a Republican now in his sixth year in Congress, has continuously beat out his Democratic challengers.

It could be in part because he lives in the district. “At least David Valadao is from Hanford. He knows the people,” a Lemoore city councilwoman, who considers herself a progressive, told the Los Angeles Times last month. On Tuesday, he faced only one opponent in the primary: T.J. Cox, a chemical engineer, who lives two districts to the north. Both will head to the November election.